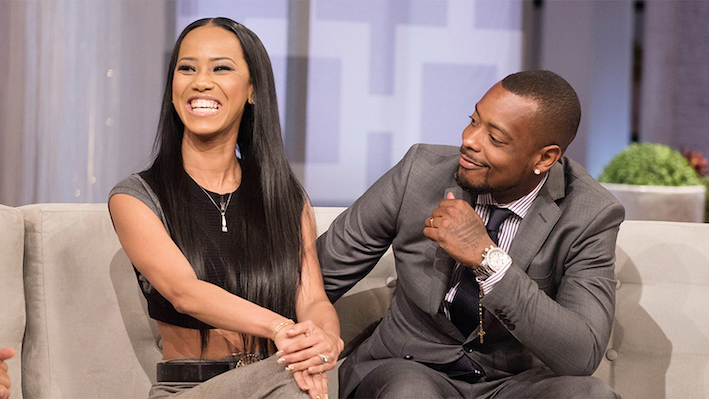 Brandi Boyd is pregnant! The former LHHH star and husband Max ‘Lux’ Boyd are expecting their third child together.

Brandi took to her Instagram to share the baby news. She wrote alongside a sonogram, “I will never let you guys down#Gods #Baby3 #Siblings4ever”

Earlier this week, Brandi and Max got into an altercation on Instagram live in front of their kids. The exchange was captured in the form of an audio clip by website Gossip In The City .

In the audio clip, Brandi and Max can be heard arguing while the couple’s daughter, Cadence, can be heard crying in the background.

“Last time y’all see him beating on me. Never again will you see your father beat up on me,” Brandi says to her children after Max goes on a rant.

He later yells, “You think you going to disrespect me to the world , Brandi? Is that what you think? You’re not!”

Baby Cadence then starts to scream and Brandi yells, “Call 911 Brandus. Your sister just got hit in the lips.”

“Call them yourself, bi*tch, before I fu*ck you up,” Max retaliates.

Max has since taken to Instagram to deny that he hit his wife. Brandi, too, took to social media to back her husband up.

She wrote, “I am fine. He didn’t touch me. I was choking him and fighting him. All he did was verbal abuse me back. I am sorry for going live. I did that to force us to take space knowing he wouldn’t want to argue on live. Please pray for my family. The devil is attacking so strong.”

Many fans don’t believe that Brandi wrote the post. One fan commented, “He has her phone. I don’t believe she wrote this, praying for my girl tho.”

Another said, Don’t lie for that man.”

“But you said your daughter got hit in her lip tho. WTF that baby was screaming. wow,” yet another person commented.

Brandi and  Max , who have been married for seventeen years, appeared on season 2 and 3 of Love & Hip Hop: Hollywood, which chronicled the struggles in their marriage. The duo welcomed their son Prince Brandus in 2013 and their daughter Princess Cadence in 2019.