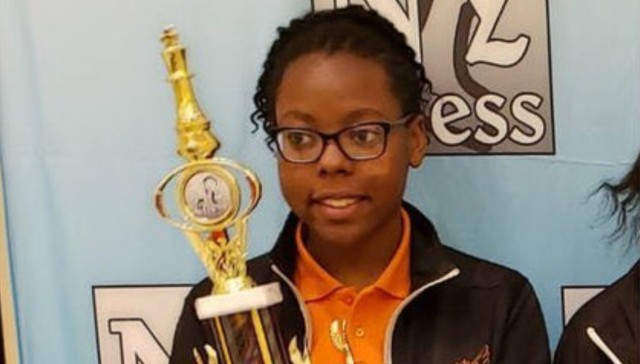 At 15-years-old, Jessica Hyatt is on her way to making history as she is just a few ranks from becoming the first Black woman chess master! And, to add to that, they talented young woman, who is one of the top 10 Black female chess players in the US, recently received the prestigious Daniel Feinberg Success in Chess Award which comes with a $40,000 college scholarship.

“I play whenever I get the chance, like in my free time, like during my classes, like sometimes during classes,” the Brooklyn teen told CBS News in an interview, also noting that she plays at least 5 to 7 hours a day.

Currently a sophomore at Success Academy, a school known for having an exceptional chess program, Hyatt has her sights set on becoming a chess master. To become a chess master, one has to have a 2,200 ranking, Hyatt is already at 1,950.

Five years ago the talented teen met her coaches Tyrell Harriott and David Mbonu, who are both National Chess Masters, the highest level in the United States.

“I learned the game when I was 15, so for Jessica to be at 1,950, that’s a huge edge,” said Harriot in the same interview. He also added that, “The first thing she did right around when class was over is she walked up to me and she was like, ‘Can I play you?’ and I remember, I was like, ‘oh.'”

Hyatt was usually a quiet person outside of the chess world.

Mbonu echoed, “There has never been a female Black player to break the master ranking and that’s what Jessica is going for.”

As the pandemic has limited or even halted face-to-face gatherings, Hyatt continues to hone her skills by playing chess online. Loy Allen, Hyatt’s mother, hopes other young children of color get inspired by her daughter’s amazing story.

“If your kid’s passionate enough about it, have them go for it because the sky’s the limit, right?” said Allen.

After she solidifies her place in history, what will be next for Hyatt? Well, she dreams of attending MIT for college and plans to teach chess to other children as well.

Congratulations, Jessica! We cannot wait to see what is next.