WHO IS TWELVE-YEAR-OLD DJ SOPHIA? 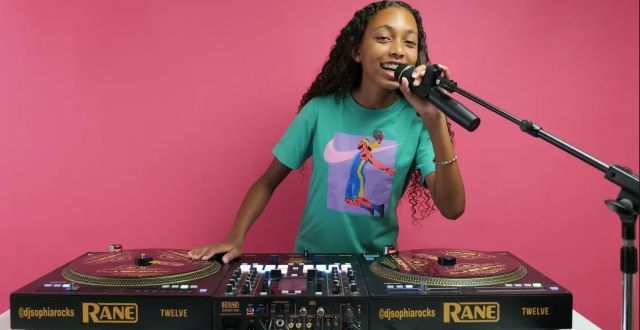 We all know that when it comes to getting the party truly started, the DJ is the most important person in the room. Well, when you are 12-year-old DJ Sophia Clayton, getting your audience hyped is not a problem.

According to her website bio, DJ Sophia started to show an interest in learning to DJ at the age of 2. She started performing professionally by the time she was six, with the motivation to do what she loves and make people smile in the process.

Influenced by her father, David Clayton, a former professional DJ and Baltimore-native, the talented tween honed her skills and has become a force to be reckoned with on the turntables. Spinning all music genres, she has played alongside or opened up for some of the industry’s A-listers including, Erykah Badu, The Lost Boyz, DJ Aktive, D-Nice, Kid Capri, DJ Jazzy Jeff, and DJ Suss One.

Recently, DJ Sophia sat down to talk with the Baltimoresun.com, revealing one of her wish list items-to become the official DJ for the Baltimore Ravens.

“I’ve always loved the Ravens since birth,” said DJ Sophia in the interview. “I really wanted to do something special for my followers, since the pandemic was going on and things in football were going to be a lot different.” And “something special for her followers,” did she do. The preteen hopped on her turntables and sampled old football news clips to some amazing beats to gear up fans for game day, drumming up excitement in the midst of COVID-19.

“I was on [well-known DJ and music producer] D-Nice’s [Instagram] live, and he had so many on that day, and DJ SophiaRocks was of them and I was just blown away,” said Ed Reed, former Baltimore Ravens safety and pro football Hall of Fame inductee, to the Baltimoresun.com. “I completely endorse her deejaying for the fans during half times and time outs,” said Reed. “For her to be a young lady, [performing] with no headphones, with her level of energy, is what Baltimore needs in my opinion and is just a relationship [for the team] that wouldn’t be a bad one.”

We cannot wait to see what the future holds for DJ Sophia and hope that the Baltimore Ravens listen up and adds this amazingly talented young lady to their team.