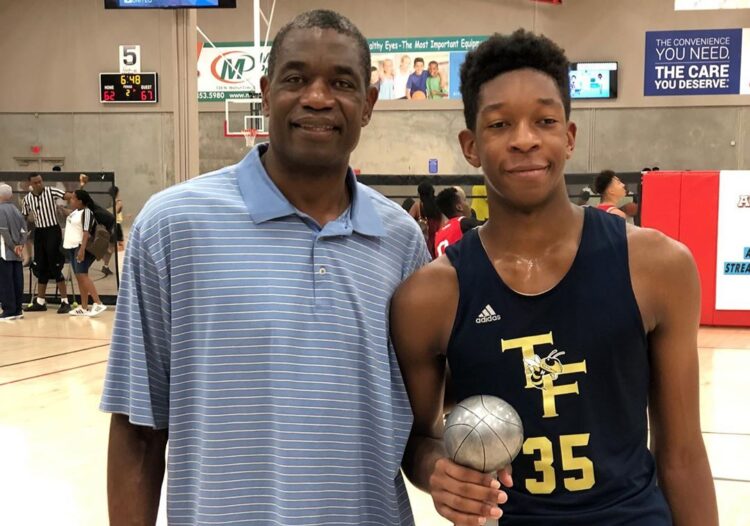 Ryan Mutombo, the son of NBA Hall of Famer Dikembe Mutombo, followed in his father’s large footsteps by recently announcing his commitment to Georgetown, his father’s alma mater.

Ryan took to Twitter to announce his decision, posting a short highlight video that ended with him showing off a Georgetown shirt and the words “Georgetown Hoyas, 110% committed” appeared on the screen. He captioned the post: “Solid as they come 💙.”

Solid as they come💙 pic.twitter.com/vhvKNuzbLW

Dikembe Mutombo was quite proud to have his son continue the family legacy at Georgetown, tweeting: “I am so happy that my son, @RyanMutombo committed to Georgetown University. @GeorgetownHoops @HoyasUnlimited.”

Ryan Mutombo plays for Lovett School in Atlanta, Georgia. Standing at 6’11” and weighing about 235 lbs, he has inherited his father’s size and talent and is a defensive force on the court. A Top class of 2021 recruit, Ryan Mutombo selected Georgetown over a prominent list of schools which included: Florida, Florida State, Tennessee, Stanford, Virginia Tech, Wake Forest, Vanderbilt, Georgia, Georgia Tech, Richmond, Texas A&M, and Appalachian State.

Ryan Mutombo says that Georgetown wasn’t “a lock,” and that he also strongly considered Stanford, Georgia, and Tennessee before making his choice. “It came down to Stanford, Georgia, Tennessee, and Georgetown. I had so many great options and there were really times where I almost committed to another school, but it definitely wasn’t a lock for Georgetown as most people predicted. It was a long process to get to this point.”

Ryan Mutombo explained why he chose to commit to Georgetown, saying that it “stood out” since Georgetown is coached by NBA Hall of Famer and Georgetown alum Patrick Ewing, who Ryan calls ‘Uncle Pat,’ as he has known him all his life. “It stood out because Patrick Ewing would just be the perfect mentor for me to study and develop and grow under,” said Ryan. “Our skill sets are so similar.”