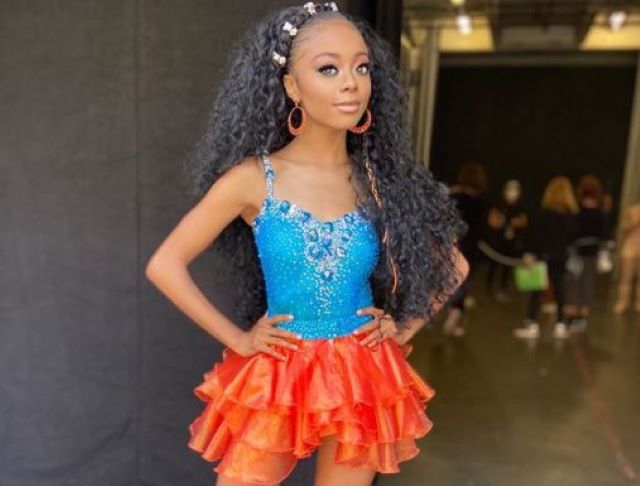 Skai Jackson has been in the entertainment industry since she was a baby. It is hard to see her other than the sassy little Zuri Ross on the Disney Channel’s Jessie and Bunk’d, yet she is all grown up.

At 18-years-old, the talented star is dancing into everyone’s living rooms week after week as a contestant on ABC’s hit television show Dancing With the Stars and her stylist has taken her look from Disney to young adulthood.

Recently her stylist, Ray Christopher, sat down with MadameNoire to tell us all how he has helped Jackson make her glamorous transition.

MadameNoire: Skai looked like a living doll during last night’s show! How would you describe the look you did with her hair?

Ray Christopher: I like to call it the “goddess natural.”

MadameNoire: How did you both decide to go with the big curls and braid at the front after doing the sleek and simple braid last week?

Ray Christopher: We really wanted to bump up the look this week and woo the audience. So once I saw her outfit, I instantly knew I wanted something spicy!

MadameNoire: How can others achieve this look? And what products did you use to get it?

Ray Christopher: I’ll let you guys in on a little secret – her hair was in a protective style in the back. I just used a curly fall for the back and in the front I used the new Dove Amplified Textures Shine & Moisture Finishing Gel to slick down and design her baby hairs. I really like this alcohol-free gel because it doubles as a styler and finishing gel, and gave her hair a light all-day hold – just what she needed for the dance floor! I finished off by spraying Dove Style + Care Compressed Micro Mist Extra Hold Hairspray to add extra volume to her hair without all the stiffness.

MadameNoire: How do you see yourself experimenting with Skai’s hair if she gets to continue to compete in the weeks to come?

Ray Christopher: I have so many ideas that I am super eager to work on – from buns to ponytails and wigs. I am so excited for you guys to see her different looks each week. I predict she’ll go all the way to the end!

MadameNoire: And one thing I’ve noticed is that you help her, along with the costumes chosen, to achieve looks that remind people she’s not a little Disney kid anymore. She’s grown! How important is that and how do you make that happen through hair?

Ray Christopher: Yes, people fail to realize that she’s 18 and trying to separate herself from that 12-year-old persona. I really just try to stay away from hairstyles that are on the younger side and style her hair in a way that lets people know she’s transitioning into a grown woman.

Although the young star’s look was nothing less than than a 30/30, her climb to reach the top of the dancing heap took a little bit of a ding this week as she earned a 15/30 overall score.

The pair danced a Samba to Ne-Yo’s “Miss Independent,” although it was a small hiccup, judges Carrie Ann Inaba, Bruno Tonioli, and Derek Hough still were tough.

“I knew it wasn’t either of our faults; it was the floor. It was really slippery, they had confetti from the last performers before us, so that kinda messed things up,” Jackson told ET in an interview. “But it’s totally fine. I mean, yes, the judges would give us lower scores, but I’m just gonna take all that advice that they gave me and bring that onto week three, and just work harder.”

Take a look below at the performance and let us know what you think about the duos dancing and Skai’s new look. Sound-off, we want to hear from you!