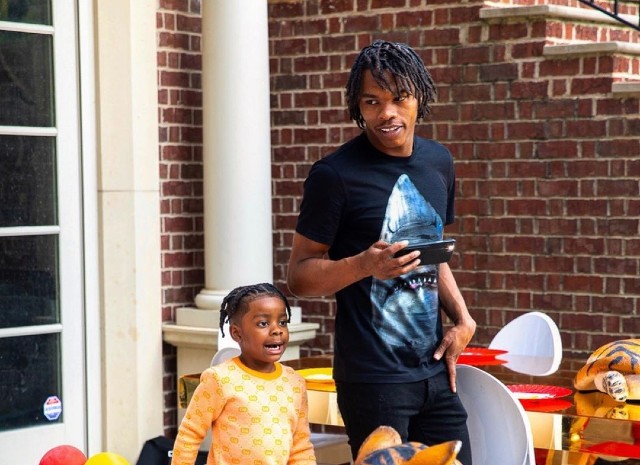 Lil Baby’s son Jason, who he had with his ex-girlfriend Ayesha, recently celebrated his fifth birthday with a listening party where Jason made his rap debut on stage, taking after his rapper father. However, Lil Baby himself wasn’t at the party and Ayesha didn’t hesitate to slam him for it.

After a fan said that it would have been nice if Lil Baby could have supported his son at the party, Ayesha replied: “All that matters is that my son is happy. I don’t care about petty childish mad a-s people and their sucker moves. I’m going to always stand behind mine 💯and there isn’t a man or woman that could change that and that’s the difference ✨ and I plan on instilling the real in my son as long as I breed a real man out this situation. I could truly care less about anything else❗❗.”

Ayesha took to her Instagram to show off a few pictures and videos of young Jason’s party, which included big blue letters that spelled “JASON”, DJ’s, a stage for Jason to rap on, and the beautiful cake had a red carpet theme with a microphone on it. Jason was the life of the party; not only did he rap, but he also signed autographs for his guests. Ayesha captioned the post:

“It meant the world to me seeing how passionate you were about your music and I’m beyond proud of you Jason ❤️ you rapped your heart out, danced, autographed T-shirts and was truly the life of your party. I am so thankful and blessed to have such an amazing, outgoing, brave, and free-spirited son,” she wrote. “I know you enjoyed your birthday and I’m happy I was able to make it happen for you ✨ I’ll go to the end of the world and back to see you smile! thank you to everyone that came out and celebrated and a special thanks to @buuworld my favorite DJ and @lanilove_ for an amazing performance✨ happy 5th birthday baby Jason wishing you many more.🤩🤘🏾💫.”

However, Lil Baby actually did throw his son a different party to celebrate his fifth birthday a few days before. Instead of rap, Lil Baby’s party for Jason had a carnival-theme, complete with a dunk tank, magicians, dancers who juggled and performed with fire batons, a balloon sign that spelled “JASON,” inflatable slides, and a colorful cake that also was carnival-themed. Lil Baby’s younger son Loyal, who he had with Jayda Cheaves, was also in attendance. In the caption of Jason’s birthday post, Lil Baby wrote: “Happy Big 5 @1_jasonarmani… Love You 💙💙💙.”

T.I. AND TINY DOTE ON THEIR DAUGHTER HEIRESS HARRIS

T.I. AND TINY DOTE ON THEIR DAUGHTER HEIRESS HARRIS