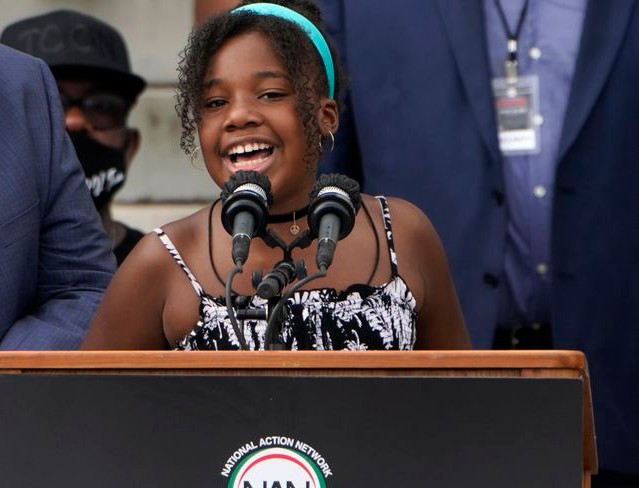 12-year-old Yolanda Renee King, the granddaughter of the late Civil Rights icon Martin Luther King Jr. (MLK), recently spoke at the 2020 March on Washington about her legendary grandfather and about racial equality.

On August 28, 1963, Martin Luther King Jr. gave his iconic “I Have a Dream” speech in Washington D.C. Now, 57 years later, his granddaughter Yolanda King is part of a new generation speaking up in the fight for MLK’s dream of a nation where people “will not be judged by the color of their skin but by the content of their character.”

On August 28, 2020, the thousands converged on the National Mall in Washington D.C. for the Commitment March: Get Your Knee Off Our Necks rally, organized by the National Action Network (NAN), to protest against police brutality, systemic racism, and calling for racial equality and criminal justice reform. With her father, MLK’s son Martin Luther King III by her side, Yolanda King stood on the steps of the Lincoln Memorial and gave an emotionally charged speech, proclaiming to the crowd that her generation would fulfill her grandfather’s dream.

“My generation has already taken to the streets peacefully with masks — and socially distanced — to protest racism,” said Yolanda. “And I want to ask the young people here to join me in pledging that we have only just begun to fight and that we will be the generation that moves from ‘me to we.’”