KEVIN HART AND WIFE ENIKO CELEBRATE AT THEIR BABY SHOWER 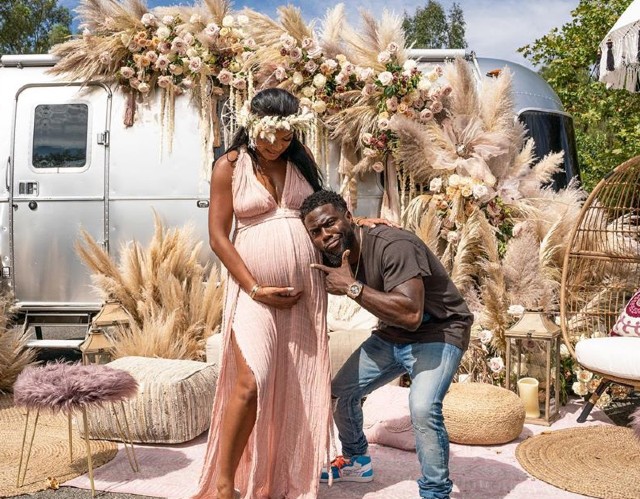 Kevin Hart and his wife, Eniko Hart, celebrated the impending birth of their daughter this past weekend with a baby shower. Nick Cannon’s pregnant ex, Brittany Bell, was in attendance with their son, Golden Phoenix Cannon.

Kevin and Eniko had a Bohemian-themed bash that was COVID-19 safe. Guests were given the opportunity to drive through the shower and wish the celebrity couple well. Eniko wore pink to commemorate her and Kevin’s expectancy of a girl. “Getting close,” Kevin told his Instagram fans

It was just a few weeks ago that the Harts revealed the gender of their unborn child with a cute gender reveal party. The bash only included immediate family members because of party attendance restrictions brought about by the coronavirus pandemic. Nevertheless, Kevin, Eniko, and the kids had a blast despite the limited party capacity.

Eniko and Kevin Hart are enjoying good times these days. It was just last week that the celebrity couple commemorated their wedding anniversary along with her birthday.

“Happy B-Day @enikohart,” Kevin wrote to his wife. “Seeing you smile makes me smile more,” the comedian continued. “Love you to the moon and back.”

Eniko took to Instagram after her birthday and wedding anniversary festivities to thank her husband who made the day extra special. “Our Anniversary and birthday celebration was beyond special because of you,” Eniko wrote to Kevin. “Thank you, babe, for continuing to create memories that’ll last a lifetime,” the model said.

Kevin and Eniko Hart are expecting their daughter to arrive in the coming weeks. The little one will join her brothers, Kenzo and Hendrix, and sister, Heaven, at home.