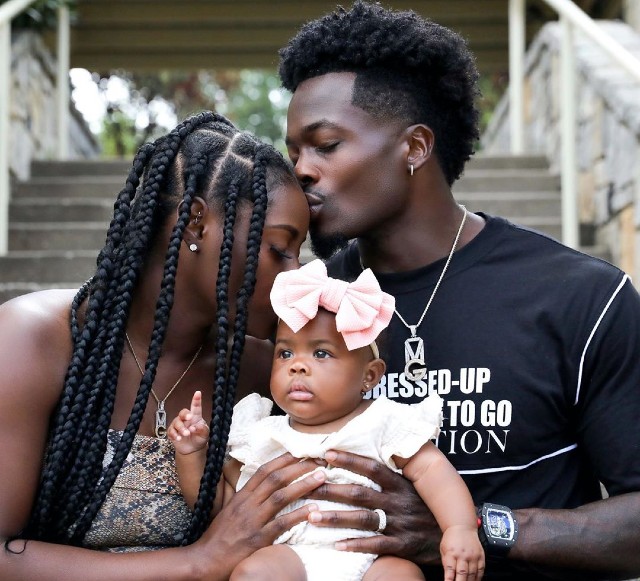 The NFL 2020-21 season is approaching, but Philadelphia Eagles receiver Marquise Goodwin is opting out of it, citing his wife and daughter as the reason.

Marquise Goodwin and his wife Morgan welcomed their baby daughter Marae Goodwin in February 2020. Marae’s birth comes after Morgan suffered three miscarriages between 2017 and 2018, which took an enormous toll on their emotional health. Previously Marquise wanted to prove that he was “dedicated to winning” and that he “wouldn’t let anything keep me from that goal, not even my family.” Now he is putting his family first and opting out of the upcoming NFL season, unwilling to risk his family’s safety as the threat of COVID-19 lingers. Marquise posted a video of his opt-out statement to YouTube and also wrote his statement on Instagram. His statement reads as follows:

“It is truly a blessing and privilege to be able to play football, a game that I love so much and have been blessed to play since the age of 9. The NFL Organization provides my family and I with many opportunities that wouldn’t have presented itself in other industries,” wrote Marquise. “Traveling to several States multiple times a year and internationally to play on foreign soil has allowed me to gain an appreciation for different cultures and a wider world view perspective. The NFL Football organization has allowed me to create a platform I always dreamed of and it allows me to reach numerous people on different stages of life.”

#HappyFathersDay to myself, as well as all the real ones handling their business like a REAL man. This my 1st FD with a living child… this one hits waaaaay different 😍 #GOODWINSZN #GirlDad 🖤

“Three years ago, I made a decision that affected my whole life. I chose to leave my wife at the hospital after prematurely birthing our first baby boy (due to incompetent cervix) which resulted in a fatality, to play in a football game,” continued Marquise. “I felt like I had to prove to my coaches and new team that I was dedicated to winning and I wouldn’t let anything keep me from the goal, not even my family.”

“The following year in the same month, same week, our lives took another traumatic turn. Two weeks after learning her abdominal cerclage was failing, my wife called me shortly after we landed and arrived to our team hotel in Tampa, Florida to inform me she was having painful contractions, and my grandma (who flew up to help take care of Morgan while I would go to work and away games) had to rush her to the emergency room. Here we are again in the same predicament as a year ago, except I was almost 3,000 miles away this time,” said Marquise. “Anxiety weighed heavily on me because I once again had to decide – will I choose to play a game again like everyone may expect me to, or do I go home and tend to my ailing wife? After much prayer and discussion, I told our team GM that I absolutely had to fly back and take care of my wife, in attempt to honor my wedding vows that I made to both her, myself, and God.”

I told wifey TODAY is her day, we can do whatever in this world that she wanna do; but TONIGHT when them Sunday night lights cut off, ain’t kickin no field goal LETS GO FOR 2 🤪 (I got barzzz 😅) #GOODWINSZN HELP ME IN WISHING MY WIFEY A HAPPY BIRTHDAY @morgangoodwin 🚀 📸: @patrickgilbreath