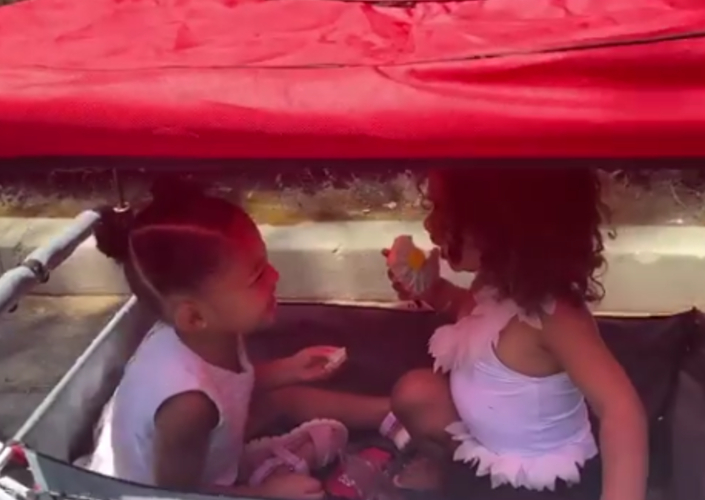 The Keeping Up With The Kardashians (KUWTK) kids were being chauffered around in a wagon and speaking what some call baby talk when Chicago decided to address the subject of Stormi’s hair. Kim Kardashian’s daughter touched her cousin’s mane before saying, “I like your hair.” Stormi responded by saying, “Thank you.”

Kylie Jenner joined her social media fans in taking in the moment as simply precious. “These two,” the celebrity mom captioned underneath the clip. “They’re so cute,” one of Kylie’s friends responded after seeing Stormi and Chicago’s interaction. “Perfection,” Jaclyn of JACLYN Cosmetics said.

Kylie Jenner has already introduced her daughter to the business of beauty. It was just a few weeks ago that the Keeping Up With The Kardashians star launched the Stormi Collection in her Kylie Cosmetics brand.

“I think I’ve been waiting for this moment since the day I found out I was pregnant,” Kylie shared with her fans ahead of the big launch in February. “An entire collection by @kyliecosmetics dedicated to my beautiful daughter,” the celebrity mom said.

The Stormi Collection arrived just in time for Stormi Webster’s second birthday. The debut was that much more significant given the youngster’s role as both promoter and brainstormer.

You can learn more about the Stormi Collection at the Kylie Cosmetics website. Stay tuned for more Keeping Up With The Kardashians kids news!