Home » NEWS » MONICA ON MARRIAGE TO SHANNON BROWN: ‘I HAVE AN AMAZING DAUGHTER’

MONICA ON MARRIAGE TO SHANNON BROWN: ‘I HAVE AN AMAZING DAUGHTER’

"I Learned A Lot" 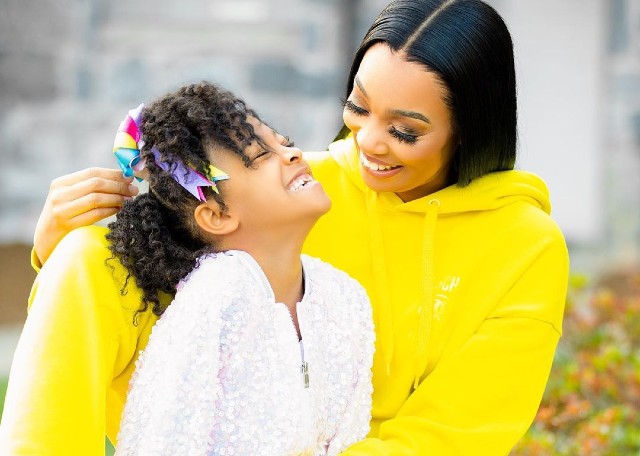 Monica and her daughter, Laiyah Brown, were recently photographed while quarantining at home. Many fans cannot get over how big Monica’s daughter has gotten.

Most remember Laiyah as the little one who appeared to be the boss of her older brothers, Romelo and Rodney Jr. Laiyah has, however, grown by leaps and bounds these past few months. The latest candids of the youngster with her mom are proof of her development.

Stay HOME…. Stay HAPPY…. Stay HEALTHY… ♥️Mom says Count it All Joy , so that’s what we do… and a little backyard Jenga LOL

Laiyah was photographed while looking into her mom’s eyes at one point during the photo session. The youngster touched her mom on the shoulder while standing beside her. “Mom says Count it All Joy , so that’s what we do,” Laiyah captioned underneath the picture. The youngster told her Instagram fans that she and her mom also played “a little backyard Jenga.”

It has been several months since Monica finalized her divorce from NBA player Shannon Brown. The celebrity mom spoke on her dissolved marriage during a recent episode of T.I. and Tiny: Friends and Family Hustle.

“I’m proud of what my marriage was,” Monica revealed. “It lasted nine years, [and] I have an amazing daughter,” she added. “I learned a lot, I lived a lot, I wasn’t looking for nothing (sic) when we met. I hadn’t heard of him. I didn’t know who he was. My boys were super small so I wasn’t watching sports. I didn’t know who he was at all. But it happened because it was supposed to happen.”

While appreciating the past, Monica looked forward to the future. “I really want somebody that can be the head and not the tail because I like to be led, but I love to be led right,” the celebrity mom said when considering the type of partner she would like to manifest.

“I’ve got to orchestrate, handle, tell people what to do, what time to do it, how to do it, which way I want it done. I don’t wan’t to do that at home. Please take over!”

Laiyah Brown is Monica and Shannon Brown’s only child together. Rodney and Romelo Hill are Monica’s kids with Rodney “Rocko” Hill Sr. Check out Monica and her family on T.I. and Tiny: Friends and Family Hustle, which airs on VH1 tonight at 9 PM (ET).