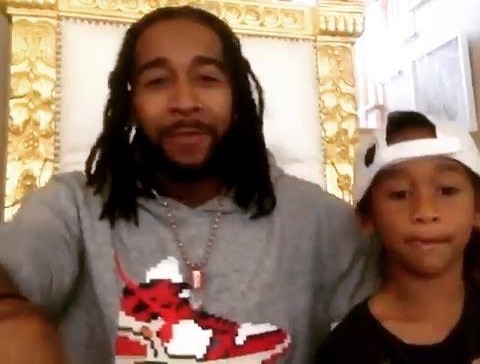 Omarion and Megaa Grandberry are here for the beats! The celebrity father and his son launched the ‘Father-Son Beatbox’ challenge on Wednesday (April 8) in an effort to encourage fathers to spend more time with their kids during this season of quarantine.

“We’re here for the ‘Father-Don Beatbox Challenge,'” Omarion told his social media fans earlier this week. The celebrity father got his viewers excited about the challenge before going into his session of beats. Omarion kept a steady rhythm but it was Megaa who stole the show. The youngster stood for his segment and delivered incredible beats that were complex.

“Okay, Megaa,” one fan exclaimed. “Was that a little MJ ‘The Way You Make Me Feel,'” the social media follower asked. “Y’all bond is goals when I have a son,” another fan said.

Omarion is building a legacy from which his kids may glean in later years. The celebrity father spoke with NBC News about what he hopes to leave behind in 2017.

“I want [my legacy] to be one of perseverance, gangster persistence, and something that was touched by another power,” Omarion shared. “Some people would use the word ‘God’ or ‘universe,'” he added. “I really want people to know that it exists. That steps can be ordered. That’s what I want to leave behind.”

MALIKA HAQQ IS 'DANGEROUSLY IN LOVE' WITH HER BABY BOY