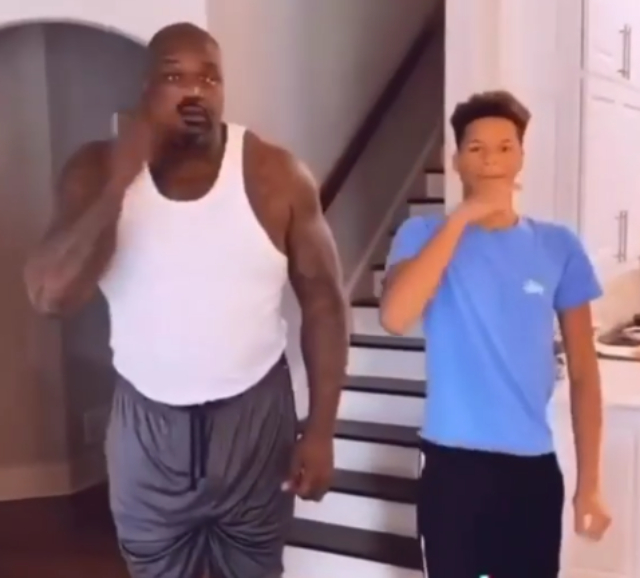 Shaquille O’Neal, a.k.a. Shaq, and his son, Shaqir O’Neal, have major moves! The celebrity father and his son recently took to Tik Tok for a dance-off.

Shaq and Shaqir began their presentation in the kitchen of the family’s home. The celebrity father and his teen were so fresh that they had to move the dance session to other parts of the house.

“I love Shaq,” one fan said after seeing the Tik Tok video. “So adorable,” another social media follower wrote. “[There is] nothing like family.”

It was just a few weeks ago that Shaq told the press that his kids deem him as a cool dad. “To them, I’m more ‘cool dad,'” the celebrity father revealed. “I let their moms do the discipline,” Shaq added. “I’m just [like], ‘Hey, let’s go take a ride’ and show them things. … But like when they hang out with me, it’s more just hanging out and they’re backstage and know how big of a privilege it is.”

Shaquille further explained, “It’s fun being a dad. I think what they understand and respect about me is they know I walk the talk. So I can show them my moves as a big man. But I can also say Kobe Bryant did it like this.”

“And their eyes open up. I’ll say Tracy McGrady did it like that and they will pay attention. I’m one of the greats but I also played with the greats so when I’m teaching it, they are open to it.”

Shaq appreciates the positive impact he’s had on the lives of his children. Still, the celebrity father wants all of his kids to exhibit individuality. “I tell them all of the time that the world does not need another me,” Shaq shared with the press. “Be yourself,” the celebrity father said.

LeBron James and his son, Bryce James, have also shown off their dance moves on Tik Tok. Who do you think has better moves? Share with us and follow @officialbck on Instagram!