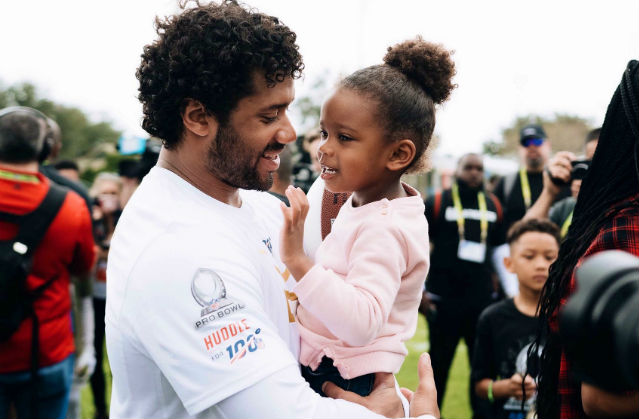 Russell Wilson had the support of Ciara and the kids, Future Zahir and Sienna, during his recent pro bowl practice session. Keep going for the cute pictures and video footage!

The video clip of Russell and Future Zahir was nothing short of precious. The NFL player made his way to the field in the footage while his stepson walked beside him.

“Brought little man with us,” Russell said in reference to little Future. “It’s time to get to work,” the celebrity father said before taking to the field and throwing stellar passes. Future Zahir joined his mom and sister on the sidelines while Russell and his teammates prepared for the future.

The Seattle Seahawks are not going to the Super Bowl this year. The team, however, has plans to make it to the championships in the near future. “You’ve got to get you another ring next year, Russ,” one fan shared after seeing the clip of Russell practicing for the upcoming season. It would be nice to see the Seahawks at Super Bowl 2021, wouldn’t it?

Russell Wilson revealed how fatherhood has turned him into a better quarterback during a 2017 interview. “I think more than anything when you see family, have your own family and it continues to grow, you know it’s a special thing,” the star athlete said.

“I don’t just play for my family I’ve had before, but also my new family,” Wilson explained. “Just playing for the little ones, playing for Ciara too and just playing for my teammates and trying to do everything I can to be the very best I can possibly be. I’m just truly grateful every day to get to come home and it puts a smile on my face every time.”