Home » NEWS » KYLIE JENNER AND HER DAUGHTER, STORMI WEBSTER, GIVE FANS A TOUR OF THEIR HOME FOR CHRISTMAS

Stormi Got A Playhouse! 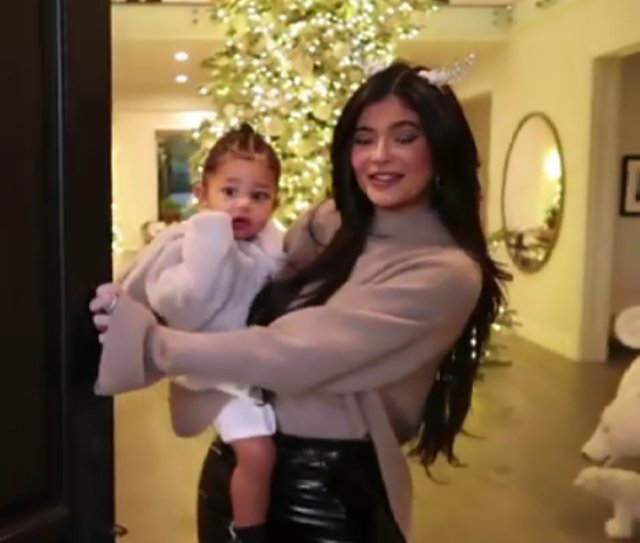 It’s Kylie Jenner with her daughter, Stormi Webster, wishing you a very merry Vlogmas! The Keeping Up With The Kardashians (KUWTK) star decided to give her YouTube fans the gift of a house tour alongside her baby girl who also appeared to be in the Christmas spirit.

Kylie had at least three full-sized Christmas trees throughout her living area. The celebrity mom also showed off her daughter’s playhouse, which happened to be the same playhouse that Kylie enjoyed when she was a little girl. Kylie’s mom, Kris Jenner, went to great lengths to set up her granddaughter’s home in the same way that Kylie’s playhouse was established nearly two decades ago. The celebrity grandmother even placed Kylie’s old play furniture in the house. “I want you to have the same memories with your daughter,” Kris said of the motivation behind her gifting Kylie and Stormi with something so sentimental.

Stormi Webster certainly appeared to enjoy her new house. The little one was initially skeptical of the structure. Stormi, however, broke free of her reservations upon learning that she was looking at her very own playhouse.

Kylie Jenner has given her fans an inside look at her life as a mompreneur this year. It was just a few weeks ago that the KUWTK star gave her YouTube fans a tour of her office space, which included a look at Stormi Webster’s room. Kylie received special attention for her office space tour after singing ‘Rise and Shine’ to her baby girl. Some fans pointed out the fact that Stormi was not sleeping at the time her mother decided to sing. Others could not get over the incredible vocal abilities of Kylie Jenner.