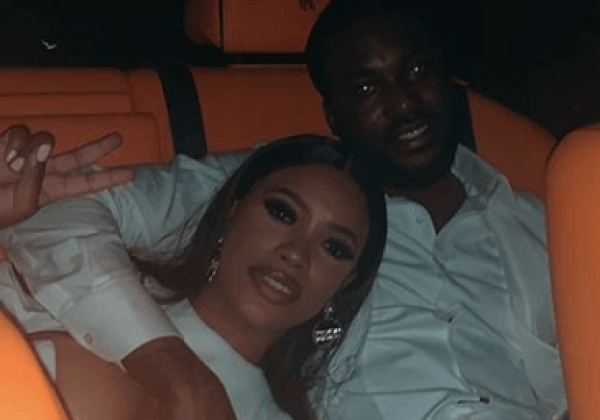 Meek Mill’s rumored girlfriend, Milan Harris of Milano Di Rouge, is pregnant! The entrepreneur revealed her baby bump during her fashion show for the clothing brand earlier this evening.

At the end of the event, the mom-to-be came on stage and thanked her fans for supporting her and she also shared that the show was hard to pull off because she is with child.

“For the past five months, i have been working at home but it’s been so hard because i had to be on top of everything..i had to work double time. Not to mention being sick. I have a different respect for pregnant women.”

Milan and Meek Mill have been rumored to be involved since earlier this year. However, if you were to ask the fashion designer, she and Meek are just friends!

She responded, “No. Meek supports Milano and I support Meek. That’s my friend.”

The fashionista emphasized that she and Meek are just “homies” and that he has been supporting her business since 2012.

Milan was later asked if she plans to start a family one day soon and she replied, “No, i need to be married.”

Meek, who already has one child, has yet to confirm the baby news. Press play to watch the interview and feel free to fast-forward to the 10:00 mark.

A PEEK INTO THE DAILY LIFE OF FIVE-YEAR-OLD INFLUENCER, GREY SKYE EVANS

A PEEK INTO THE DAILY LIFE OF FIVE-YEAR-OLD INFLUENCER, GREY SKYE EVANS