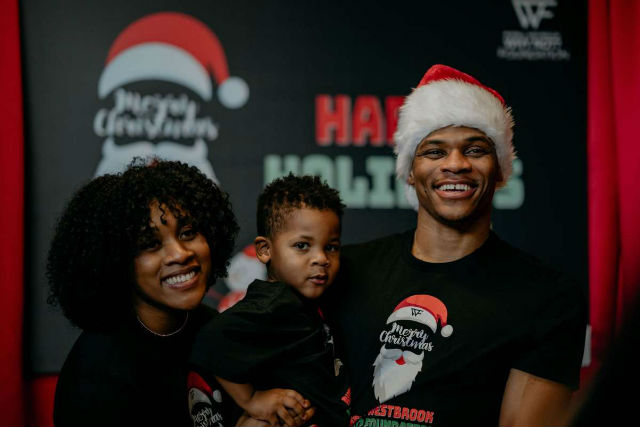 Though the Houston Rockets lost on Saturday, December 14 to the Detroit Pistons 115-107, Rockets point guard Russell Westbrook refused to let the loss ruin his holiday spirit, as he hosted a massive Christmas party for over 300 Houston children the very next day.

Westbrook, along with his organization, the Russell Westbrook Why Not? Foundation, and his wife Nina Westbrook and their son, hosted the party in Houston’s Emancipation Park on Sunday as a holiday celebration for charity. Westbrook and his foundation invited children from four different local Houston charities: The Boys & Girls Club of Greater Houston, Houston Parks and Recreation Department, Buckner International and Urban Enrichment Institute. When the children arrived, they were given Jordan Brand sneakers, t-shirts, wristbands, backpacks and an autographed photo of Westbrook, among other gifts.

.@russwest44 hosted a holiday party for over 300 children throughout the Houston community. Each kid received a holiday present from Westbrook: a pair of sneakers and a backpack. 🎁#RocketsGiveBack pic.twitter.com/JBtYB76Tvq

“I was so happy to be able to do this at Emancipation Park and partner with these incredible organizations in the Houston community,” Westbrook said about the event. “I want to continue connecting with the inner-city youth here in Houston and empower them to ask, ‘Why not?,’ when they’re told they can’t do something.” Westbrook created his Why Not Foundation in 2012, and its mission is “to inspire the lives of children, empower them to ask “Why Not?” and teach them to never give up.” Westbrook’s foundation aids struggling children and supports community education and family service programs.

The Rockets did not practice on that Sunday, as they had a day off. The Rockets have a four-game road trip ahead of them, starting with Thursday’s game at the Los Angeles Clippers and ending with a Christmas Day matchup at the Golden State Warriors. The Rockets’ most recent game was on Monday, December 16 against the San Antonio Spurs, where the Rockets rallied from a franchise record 25-point deficit to defeat the Spurs 109-107. Westbrook played an excellent game, putting up 10 rebounds and finishing with 31 points in the Rockets’ victory.

DWYANE WADE TALKS ABOUT SON, ZION WADE, TRANSITIONING: 'THIS IS THE NEW NORMAL'