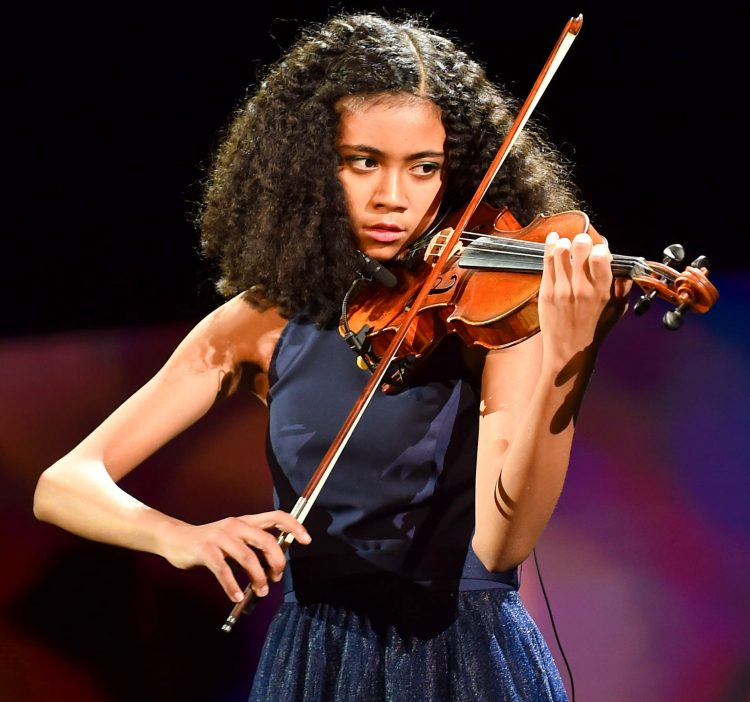 Fourteen-year-old Brooklyn virtuoso, Pilar Hill is unquestionably making a name for herself in the world of classical music. Recently, the talented teen is unquestionably making a name for herself not only in her industry but world-wide. She has mesmerized attendees at the 2019 Women in the World Summit, she has recently concluded her first tour, playing the National Anthem at NBA games in honor of Black and Women’s History, month, and she made Teen Vogue’s 21 Under 21 list.

Hill is currently attending her fourth year of Julliard Pre-Collage at the prestigious Julliard School, having become interested in the violin at a age six.

“I was actually like two or three and I saw this PBS show with an orchestra, and I was just drawn to something about it,” Pilar tells Teen Vogue in an interview. “It wasn’t like a particular instrument at that point. It’s more just how the musicians were playing altogether. It was just so magical.”

Hill told the teen magazine that she spends six to eight hours a day passionately practicing her craft, especially since black girls are under represented in the genre.

In addition to her current to-do list, Hill is getting ready to set off on another special concert for the London Children’s Hospital. However, that is not the only thing that this diverse young lady has in the works. Hill is also a model, represented by NY MMG, she is also a budding author who is actually in talks to get her work published.

“I actually submitted my book idea to a famous children’s-book publisher, and now we’re in talks about publishing my work,” she told Teen Vogue. “I’m really excited about that.”

We cannot wait to see what the future has in store for this amazing young lady, it is unquestionably going to be bright.

CHARMAINE WALKER OF 'BLACK INK CREW' IS MARRIED AND PREGNANT

CHARMAINE WALKER OF 'BLACK INK CREW' IS MARRIED AND PREGNANT