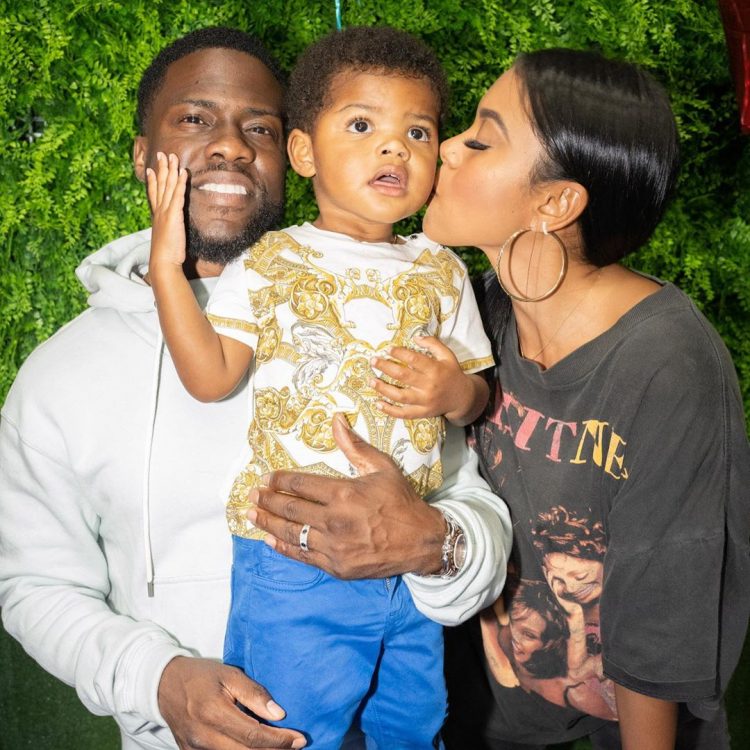 | Happy 2nd birthday to my bright eyed boy! U were made from LOVE.. ♡ Mommy loves you more than you’ll ever know!

Kenzo’s birthday bash included a customized cake and plenty of gifts. The little one was surrounded by his family who were all smiles while taking pictures with the toddler. A few fans saw a candid of Eniko taking pictures with her son and asked why she was hiding her baby bump. Eniko was sure to clear the air by telling the fan, “There’s no bump. just an oversized vintage tee.”

Eniko and Kevin Hart celebrated their son’s second birthday after Kevin’s horrendous car accident in September. The celebrity father had to undergo surgery after his 1970 Plymouth Barracuda ran off a cliff in Los Angeles. The vehicle fell ten feet and was completely totaled. Kevin was not driving the car, though the classic auto was registered to him at the time.

Kevin recently took to Instagram to give fans an update on his recovery. “Rebuilding people,” the celebrity father said. “I’m not trying to get back to where I was,” Kevin revealed. “I’m trying to reach new levels of greatness,” he added. “I want to inspire and motivate people to challenge themselves to be great. We all have greatness within … it’s up to us to tap into it.”

Kick off my Saturday morning correctly….The road to recovery is a amazing road when your focus is on nothing but being better than what you used to be. It’s You vs You in life…Become the best you possible. #HustleHart #VitaHustle #LiveLoveLaugh

Kenzo is Kevin and Eniko Hart’s only child together. Kevin Hart has three kids in all. Stay tuned for more celebrity family news!