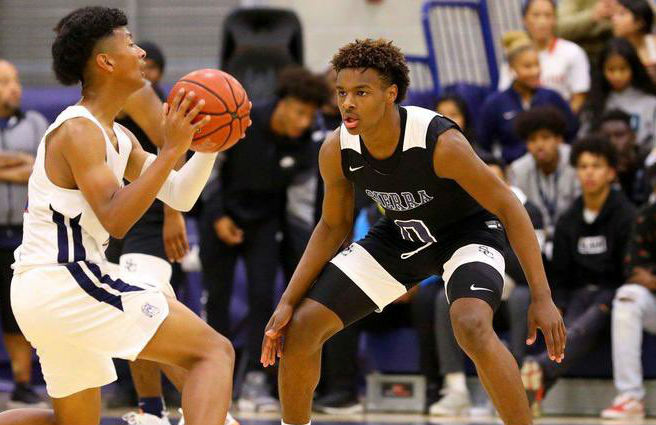 @kingjames we know you’re a little busy right now—so we got you! @bronny #familybusiness

Starting off their first season playing together, Wade and James Jr. played quite well, considering that Sierra Canyon is loaded with many talented players. In addition to James Jr. and Wade, Sierra Canyon also features top-ten Kentucky recruit, senior B.J Boston, who led Sierra Canyon with 22 points and TCU recruit Terren Frank who racked up 20 points. A freshman, the game marked James Jr’s much-anticipated high school debut, and he made the most of it. James Jr.’s first high school basket was a left-corner three-pointer, which ironically came off an assist from Wade. James Jr. finished with 10 points off the bench, including two three-pointers. Wade, who began his senior season, started his night off with a smooth alley-oop, finishing with six points.

The game was broadcast on ESPN3 as the first of an unprecedented 15 Sierra Canyon games that will be nationally televised on ESPN’s group of networks, which is more national games than some NBA teams receive. For instance, the Washington Wizards are only scheduled for four national games, including only one ESPN game. Sierra Canyon is one of the best high schools in the country, as they finished with a 32-3 record last season and are the defending CIF (California Interscholastic Federation) State Champions. Sierra Canyon was the number eight ranked high school basketball team in the country during the preseason, and is a perfect 3-0 to start off the season. With James Jr., Wade and 15 nationally televised games, the expectations for Sierra Canyon are quite high, and Sierra Canyon is meeting them well so far.