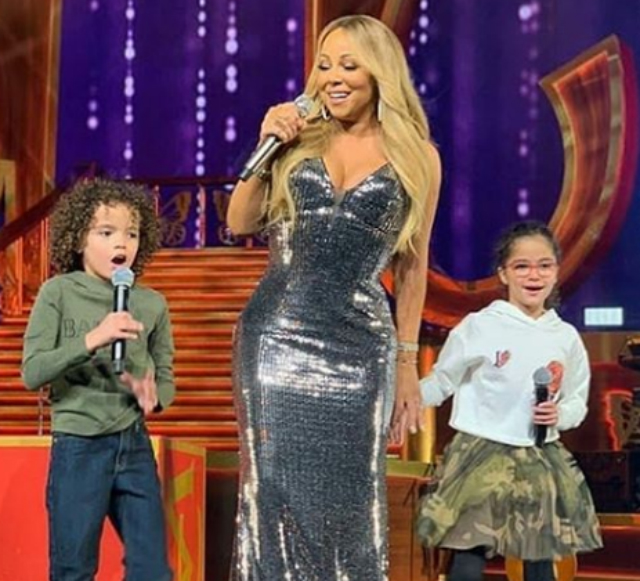 Mariah Carey is one of the most recognized voices in the industry. Generations of fans know her songs from beginning note to end; however, when it comes to her eight-year-old kids, the groundbreaking songstress is surprised that they can be included in that category a well.

When asked by Billboard in a recent interview, if the twins have any favorites among her hit songs, she told the magazine that, “They love ‘Always Be My Baby,’ ‘All I Want for Christmas Is You,’ ‘We Belong Together.’ They surprise me with the songs that they know. They’ve been to a lot of the shows — you always think they’re on their iPads rather than paying attention, but I guess they’re paying attention!”

Carey also admitted to the publication that. “I quiz them on a lot of different people’s songs — Stevie Wonder, Aretha Franklin, Michael Jackson, Prince — [and] they’ll get it right,” she says proudly.

Carey was recently named Top Female Solo Artist of All Time on the Billboard music charts. She has the most number one hits on the Hot 100, and the female artist who has spent the most time at number one.

“Oh, my God. To see the success on all the different charts, to hear you say that is mind-blowing,” Mariah responds when the outlet asked her how she feels about her accomplishments. “I never, ever dreamt of this when I first started. I just wanted to hear my songs on the radio. When I look back on the songs that I’ve written that have become part of people’s lives, that’s what makes me the most proud.”

In addition to her most recent Billboard accolades, Carey can add “coolest mom ever” when she facilitated her kids meeting one of their idols, Stranger Things actress, Millie Bobbie Brown.

The excitement of Roc and Roe could not be contained even in a photograph as they snapped pics with the famous teen.

“Roc and Roes best day of their 8 year old lives! Thank you Millie Bobby Brown for this moment, we had a blast!” The star captioned her pic. We wouldn’t be surprised to see Roc and Roe one day on the big screen, singing on stage, or both!

MICHAEL STRAHAN SAYS HIS YOUNGEST KIDS LOVE BEING IN THE SPOTLIGHT

MICHAEL STRAHAN SAYS HIS YOUNGEST KIDS LOVE BEING IN THE SPOTLIGHT