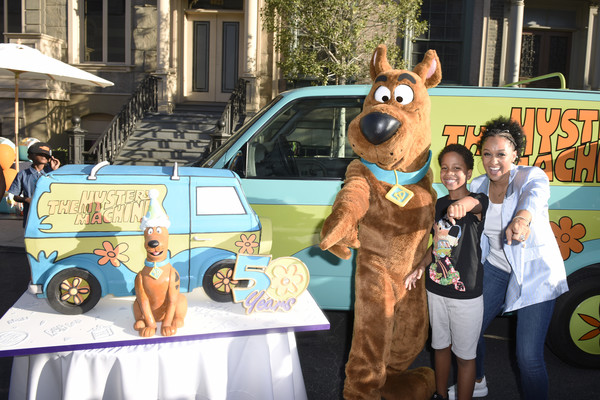 Scooby-Doo celebrated his fiftieth birthday on September 13, 2019. Tia Mowry and her son, Cree Hardrict, stopped by the bash to help Scooby commemorate his golden year.

Scooby-Doo, Where Are You? debuted on CBS on September 13, 1969. Many fell in love with the dog who was always adventurous and loving. Now, fifty years later, fans are still keeping up with Scooby and his friends.

Cree was definitely sold on the notion of celebrating the beloved cartoon character. The youngster even wore a fiftieth-anniversary t-shirt in honor of Scooby’s big day. “Celebrating #ScoobyDoo50 with Cree,” Tia Mowry exclaimed in an Instagram post. “Happy Birthday @scoobydoo,” the celebrity mom wrote.

Many joined the celebrity mom in celebrating Scooby-Doo. “Happy Birthday,” one fan wrote online. “I watched you guys since I was 4 [years old]. Now, I’m 28.” Another Scooby-Doo fan said, “Happy birthday my dear friend. We grew up together. I love you.” It seems that Scooby transcends generations.

Iwao Takamoto created Scooby-Doo and was able to see how his animated character touched the lives of many before passing away in 2007. Takamoto shared the inspiration behind his decision to draw Scooby during a 1999 interview.

“There was a lady that bred Great Danes,” the late animator shared. “She showed me some pictures and talked about the important points of a Great Dane — like a straight back, straight legs, small chin and such. I decided to go the opposite and give him a hump back, bowed legs, big chin and such. Even his color is wrong.”

Everything about Scooby-Doo turned out to be right in the court of public opinion. Stay tuned for more celebrity kids news!