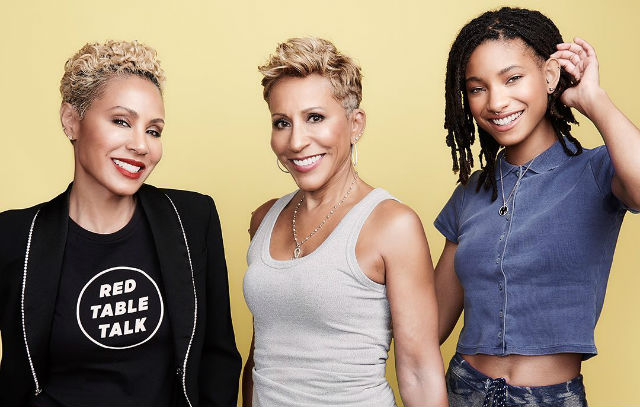 Jada Pinkett-Smith, mom Adrienne Banfield-Jones and daughter Willow Smith are featured on the latest cover of PEOPLE magazine. Inside the publication, Jada talks about her journey to redefining herself and, thus, redefining her marriage to Will Smith.

“There was too much concentration on what was happening externally, and the family unit itself wasn’t getting the attention and care that I felt we needed,” Jada tells PEOPLE. The actress also reveals that she hit a wall at age 40 in which she was ready to give up on her marriage and even life.

Join us today … with an open mind✨ @RedTableTalk, streaming now. Link in bio

From depletion comes solutions. Jada realized that she had to take time away from the spotlight to focus on her inner self. “I had to really take time out for me and figure out what I wanted for myself,” the celebrity mom says. “I had to kind of put everyone aside and ask, ‘What would I do every day if it was just Jada?’ I literally had no idea.”

It took Jada years to realize what she truly wanted in life. Now, after putting in serious work, the actress is grounded.

“I am kind of a ride-or-die chick,” Jada tells PEOPLE. “I just knew with the kind of love that Will and I share — which is beyond romantic love — that we could transform our union and figure out how to re-create what we had,” she explains.

RTT Fam… don't sleep on #Willow's wisdom. 🙌🏽 So many gems she dropped on the latest episode of #RedTableTalk. ❤️

“The journey between Will and me … we have come to such a beautiful place,” Jada continues. “I feel like we have a stronger bond than we even had in the beginning.”

You can catch Jada Pinkett-Smith, Willow Smith, and Adrienne Banfield-Jones living out their truth every week on Red Table Talk, which airs on Facebook Watch. Read the ladies’ entire interview with PEOPLE in the magazine’s latest issue. Stay tuned for more celebrity family news!