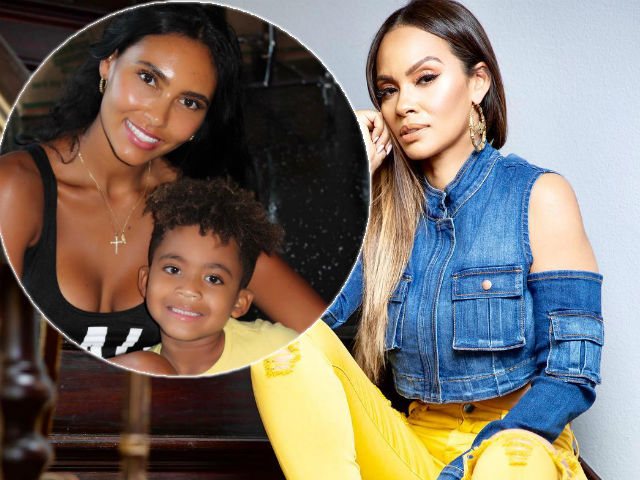 Basketball Wives star Evelyn Lozada doesn’t want any more kids. During a recent Q&A session with her Instagram fans, the mom of two was asked if she plans on having more children and she answered matter-of-factly, “No!”.

Back in 2016, Lozada, who has an older daughter and son who are twenty years apart, was open to having more children despite her struggles with infertility.

“I would love to have another child,” she said back then in an interview with Latina Magazine. “Obviously I’m 40, so you know your body changes so quickly and I’m just trying to figure it out. But yes, I’m definitely open to having another child, god willing.”

At the time, Lozada was with her son’s father, Carl Crawford, but these days, the hot mama is single and ready to mingle.

As for dating as a single mom, Evelyn says she is “not settling”, and she is selective about who she brings around her five-year-old son, Carl Leo Crawford jr.

“If i’m introducing a man to my son, that means we’re in a serious relationship!” she shared.

The reality star also touched on her short marriage to professional athlete Chad ‘Ochinco’ Johnson and said that her 25-year-old daughter, Shaneice Hairston, gave her the strength to walk away from the abusive relationship.

“I knew in my heart I deserved better. I also didn’t want my daughter to think that it was ok to stay in an abusive relationship.”

“Seeing me at the hospital spoke volumes,” Lozada added. “Me leaving that relationship also sent her another message.”

Evelyn married Johnson in Saint Martin on July 4, 2012. A month later, Johnson was arrested on charges of domestic battery after he headbutted Lozada during a domestic dispute. After the incident, the Basketball Wives star was left with a massive gash on her forehead and had to be transported to an emergency room. A few days after on August 14, 2012, she filed for divorce claiming that her marriage was “irretrievably broken”.

You can catch up with Lozada and co. on a new season of Basketball Wives, which debuts June 19.

HAZEL-E SAYS THAT CITY GIRLS' JT IS PREGNANT IN JAIL