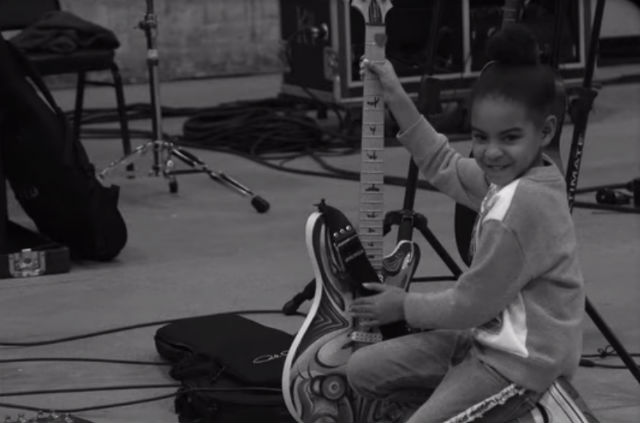 Blue Ivy Carter has next, according to members of the Beyhive who heard and approved of the 7-year-old’s rendition of ‘Lift Every Voice and Sing’ by James Weldon Johnson and J. Rosamond Johnson. Read on to see the hilarious reactions to Blue’s performance on Beyonce’s latest album.

Everybody at work or home watching Netflix next to that one non-Beyoncé fan! #HOMECOMING #Beyonce #Beychella #Netflix #SorryNotSorry pic.twitter.com/WHi1MV4bAr

Many were still shocked that Beyonce released a Netflix documentary, which told the inside story of her road to Coachella 2018, along with an accompanying album. “Thank you, #Beyoncé , for showing the world how HBCU’s ride,” one Twitter fan wrote. “Thank you for showing our black culture at an event that has a majority of white people. In this day and age, it’s hard to express our black culture because of how black people are perceived. You showed the impossible.”

Another thing that Bey showcased in the documentary and album duo was her oldest daughter’s talent. Netflix fans got to see Blue working hard like her mom in rehearsal in the documentary. Then, the 7-year-old surprised fans with an impromptu performance of ‘Lift Every Voice and Sing’ on Bey’s new album. Blue finished the song before quickly telling her mom that she wanted to do it again because it “felt good” to sing.

When Blue Ivy threw in a lil run on Lift Every Voice #Homecoming pic.twitter.com/ywKcWWawe1

Do we have a Sasha Fierce 2.0 on our hands? Some fans answer in the affirmative. “Beyoncé birthed another Beyonce,” one Twitter fan wrote after seeing and hearing Blue in action. “Blue Ivy is up next,” the fan added. Another of Bey’s devoted followers asked, “How is she running like that? Blue Ivy has the literal vocal technician as her mom, she might end up singing better than Bey at an earlier age.”

The future is a mystery. Blue Ivy Carter certainly seems to have all eyes on her right now, though. Stay tuned for more celebrity kids news!