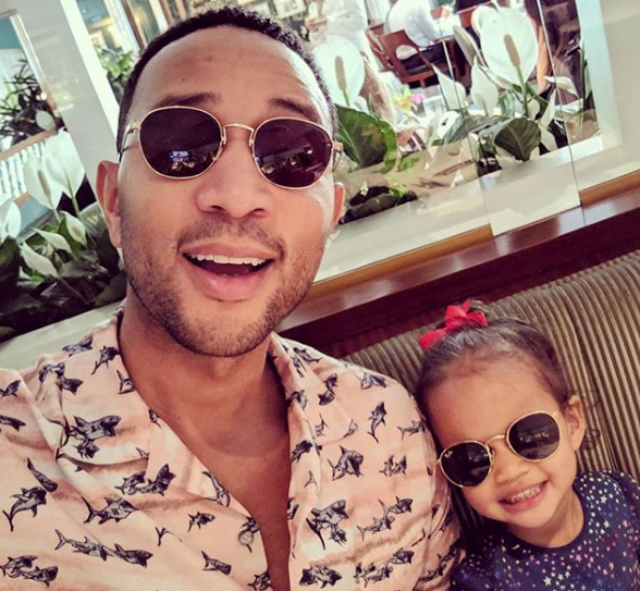 Luna Stephens and John Legend are fans of “Baby Shark.” The toddler and her celebrity father were recently filmed while singing the tune.

John began the musical segment by asking his daughter if she could identify the designs on his shirt. Luna affirmed her knowledge of the sharks present on John Legend’s shirt right before she began singing the “Baby Shark” song. The youngster changed the arrangement of the words a bit by swapping out the word “Baby” for “Daddy” in the beginning. Luna then proceeded to sing about “Mommy Shark.” She was getting all members of the family in there!

Making too much noise at lunch

“Baby Shark” continues to make waves in the United States and throughout the world. Many remain shocked that the song talking about a baby shark has become so popular. Did you know that “Baby Shark” recently made it to Billboard’s Top 100 list for Pop songs? Yes, that happened.

18 years from now the Baby Shark remix is going to play at a club and everyone is going to freak out! #babyshark

Given the success of “Baby Shark,” the viral song’s creator is looking to continue making music about animals. Penguins are reportedly on the radar in the near future. “I really liked Madagascar,” “Baby Shark” creator Seungkyu Lee recently revealed. “We’ve added the ‘K-pop factor’ into our songs, such as very trendy beats and upbeat rhythms,” Lee added. “If you’ve ever heard of ‘Baby Shark,’ you might feel the importance of community. In a group, we should walk or swim together.”

“Baby Shark” has been translated into several languages since its 2016 release. Stay tuned for Seungkyu Lee’s next great tune!