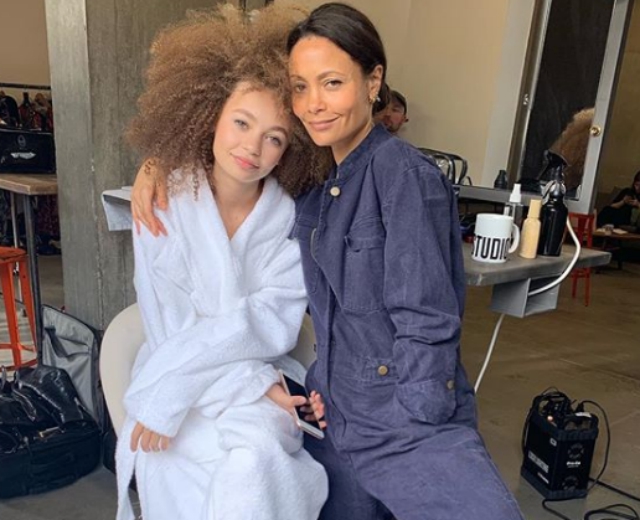 “Thank you @rio_hair @neilyoungbeauty @jeffhenny @jasminehassett @wmag for a great shoot with my baby @nicoparkerofficial,” Thandie shared on Instagram along with a picture of her and Nico behind-the-scenes. The star mom also referenced the film, Dumbo, in which Nico stars alongside Colin Farrell, Danny DeVito, and more.

Nico Parker is a 13-years-old actress, which is why Thandie Newton is so protective of her budding star. The celebrity mom delved into her Mama Bear spirit, which seeks to guard her daughter against the criticism that comes with stardom during a recent interview with Britain’s This Morning.

“She’s one of the leads in Dumbo,” Newton shared. “She was 12-years-old when she made the film,” the celebrity mom added. “She’s been on endless sets. It’s not that she takes it for granted, but it’s not a world that she feels she’s not entitled to be in.”

Newton went on to tell the co-hosts of This Morning that she is present to help her daughter and battle the trolls for Nico’s sake.

“She has her mom right there like a lioness checking that everything is looked after,” Thandie said. “You can’t stop the industry [from] operating the way it has unless the truth comes out.”

You can catch Nico Parker in her all-star role when Dumbo comes to theaters on March 29, 2019. Stay tuned for more celebrity baby news!

KEVIN MCCALL MAKES TEARFUL PLEA TO HIS KIDS: 'I LOVE YOU'

KEVIN MCCALL MAKES TEARFUL PLEA TO HIS KIDS: 'I LOVE YOU'