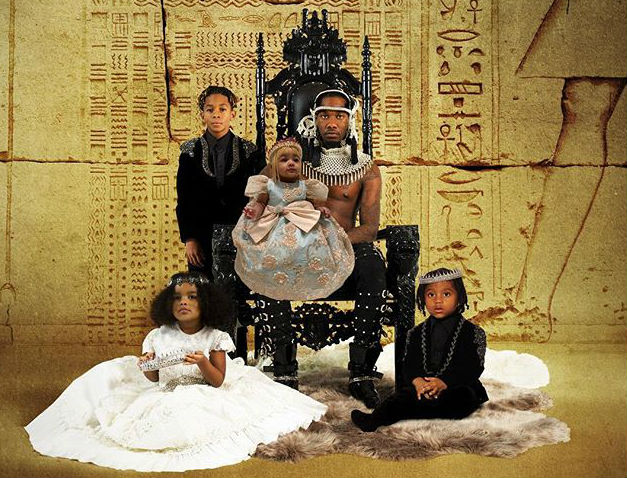 Focused on building more of a positive image of fatherhood for his kids, Kiari Cephus, aka Offset, has enlisted his entire blended brood “mini-me’s” to pose by his throne on the cover of his solo debut album, “Father of Four”.

“Have you seen my kids?! They’re beautiful,” Offset commented to Esquire in his new profile. “I cried to myself while I was this album because I was talking about by story and my kids. When I did a song, I started getting memories of my grandma, my struggles, my partner that was killed, the thoughts I had while I was incarcerated, and my kids’ faces were there in my head. I love my kids, this is who I do it for.”

Offset also explains in the Esquire profile is that the memories of his own father were beginning to fade until he undertook his new project because his father “got into the streets”. The Migos rapper hasn’t talked to his own father for the past three years.

“If my daddy called me right now,” he says in the interview, “I’d get on a jet, buy him a house, give him a million dollars, and I won’t talk to him for another ten years. At least I’d know he’s straight.” Offset added to his interview: “I’m not just all diamonds, pearls, and fancy big houses. I have flaws like everybody else. I’m a human being, too, and I want to open that up.”

It seems as if Offset is unquestionably embarking upon a journey of positive family vibes with Cardi B. and Kulture by his side. We cannot wait to see what is next for this talented rapper as he continues to evolve professionally and personally.