"Somebody's Got A Stinky Booty!" 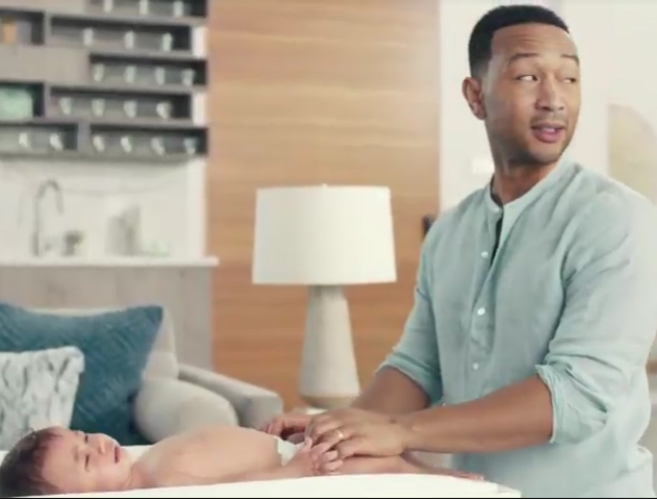 If you saw the Pampers commercial before the Super Bowl kickoff on Sunday, then you saw John Legend and both of his kids, Miles and Luna Stephens, getting help with the “Stinky Booty” jingle. Adam Levine and a host of other fathers were there to sing along.

The commercial begins with John Legend preparing to change his son’s diaper. The award-winning recording artist starts singing his celebrated “Stinky Booty” single when he signals to his daughter, Luna, that he needs help. Luna only passes her father supplies, which leads to the chorus of fathers with their children who start singing the song. The cute selection ends with Adam Levine finishing things off while changing his son’s diaper. Chrissy Teigen then enters and asks John, “Must we do this every time?” The celebrity father simply looks at his wife and smiles. Check out the cute clip below!

John Legend has become quite the expert diaper changer these past few years. The celebrity father recently revealed to media that Luna’s birth taught him everything about the activity.

“I had never changed a diaper before Luna, but I learned quickly,” John shared with the press. “It’s not hard — just do it.,” the celebrity father said. “I think us having dogs has made it easier to deal with the whole poop of it all. Once you get used to poop, you’re not too squeamish about anything.”

"THE PASSAGE" TEAM TALKS DIFFERENCES BETWEEN THE NOVEL AND THE SERIES

The Centers for Disease Control and Prevention (CDC) is now recommending the use of cloth...

Vanessa Bryant and daughter Natalia Bryant appeared on ESPN Saturday after the announcement that the...

Peyten Kemp is only 11-years-old and is already on his way to superstardom on the...

We can always count on Dwayne "The Rock" Johnson to make us smile and laugh...