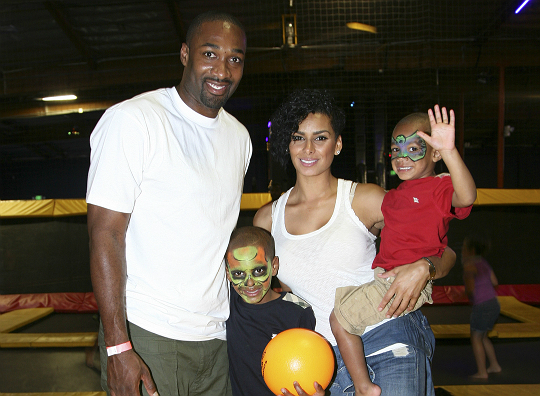 Laura Govan has had enough of her ex Gilbert Arenas’ antics. Earlier today, the former “Basketball Wives L.A.” star took to her Instagram to share with her followers a screenshot of a text conversation that she had with her baby’s father.

RELATED: GILBERT ARENAS SAYS THAT LAURA GOVAN HAS BEEN KEEPING THE KIDS AWAY FROM HIM.

The screenshot showed a photo of a 2019 Mercedes AMG G63 SUV, which retails for over 140k. Along with the photo, Arenas wrote, “Baby mommas who gives no problems gets this for xmas.” He added, along with a few laughing emojis, “Enjoy your Xmas. Heard these 2019 joints are hard to get. Hopefully, i see u with one [sic].”

In reply to Arenas’ text, Govan wrote a lengthy response on her Instagram in which she tells her fans that not only has Gilbert not seen his four kids in eight months, but he also hasn’t purchased Christmas gifts for the children.

She wrote, “Out of respect for my Kids, I have held my tongue for years and not responded to the many attacks and false allegations you have made on my character. To know me is to know how hard I work to provide for my kids mentally, physically, spiritually and emotionally.”

She continued, “I’m with my babies all day. I resist the urge to respond to all of the negativity that you send my way. But today, I have to set the record straight. My kids are my life and they are the only thing we have in common. And so I’m posting this message, to reinforce the fact that everything I do is for them. Let’s redirect Your energy Not On Buying Gifts For Others But time spent with Your Children, 8 Months is a Long time With Out time spent with NO Excuse.”

In 2017, a judge agreed with Arenas to lower his monthly child support from a reported $20,000 a month to $7,198 after Gilbert claimed that his $719,000 a month income had gone down to zero when he lost his NBA contract. During her rant, Govan shared that Gilbert wants to pay 3K/month for all of the kids.

“And since you’re in such a Giving mood how about some Christmas gifts for our babies … We won’t Get Into detail about the support you’re trying to give me for our 4 Kids but you and I Both Know that 3k a month in California Won’t Cut it as part of your responsibility to your kids. I do my part.”

“Today, I let go of the fight and ask you to step into parenthood. I Need You to take back this Unwanted Power I have Over You. I need you to understand I LOVE My Children More Then I would Ever Hate You! And For the Record. This Car Wouldn’t Be suitable for our 4 Kids so no thanks!”

Did You Know: Did you know that in 2017, Gilbert Arenas said in one of his rants that he was never married to the Basketball Wives star. He said, “Her title is a lie(we were never married) so i’m not her ex-husband….”