Home » NEWS » NOT YET! JOHN LEGEND AND CHRISSY TEIGEN ARE NOT YET READY FOR BABY NO. 3

"I Don't Know If I Can Have Any More" 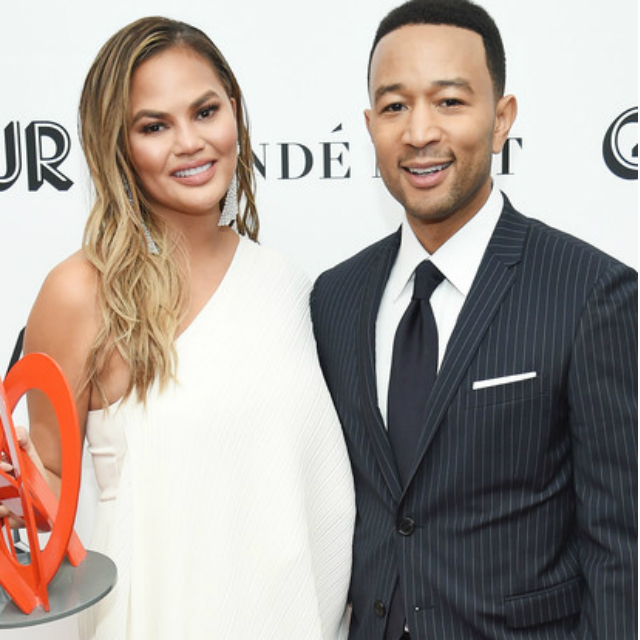 Are John Legend and Chrissy Teigen ready for another child? Not just yet. The celebrity mom recently discussed the possibility of her having more kids in the near future at the 2018 Glamour Women of the Year Awards in New York City.

“He is so happy, he can be sick,” Chrissy said of her and John Legend’s son, Miles Stephens. “He’ll throw up on himself and just smile,” the celebrity mom said of her little one’s exuberance. “He’s just the happiest bug,” Chrissy added.

Does such joy make John Legend and Chrissy Teigen want to have another kid? Well, not so much. “I don’t know if I can have any more,” Chrissy shared while chatting on the red carpet with E! News. “I got my girl, I got my boy. They’re perfect. I love them. And we’ll see!”

Chrissy Teigen certainly has been busy with business ventures that include a second book to follow in a similar path as her smash-hit debut, Cravings. Luna Stephens, John and Chrissy’s daughter, will have a key role in the making of Cravings: Hungry For More as the little one will decide which recipes are right and what options should be excluded from the collection.

Chrissy Teigen discussed her upcoming cookbook with PEOPLE during a recent interview. “I was more accepting of cutting some corners, and that has to come from having two kids now,” the celebrity mom shared. “I was wanting to put together a meal that John and I could eat together but not be exhausted from making it,” she added.

“A lot of the recipes are a bit quicker and have fewer ingredients. It’s like, ‘Wow, you can tell she’s at a different point in her life when she did this,'” Chrissy concluded.

Get your copy of Cravings: Hungry For More here. Stay tuned for more John Legend and Chrissy Teigen news!

DID JUDE DEMOREST AKA 'STAR' HAVE HER BABY?

DID JUDE DEMOREST AKA 'STAR' HAVE HER BABY?