CHRISSY TEIGEN MOMSHAMED FOR NOT BREASTFEEDING

"You No Longer Breastfeed?" 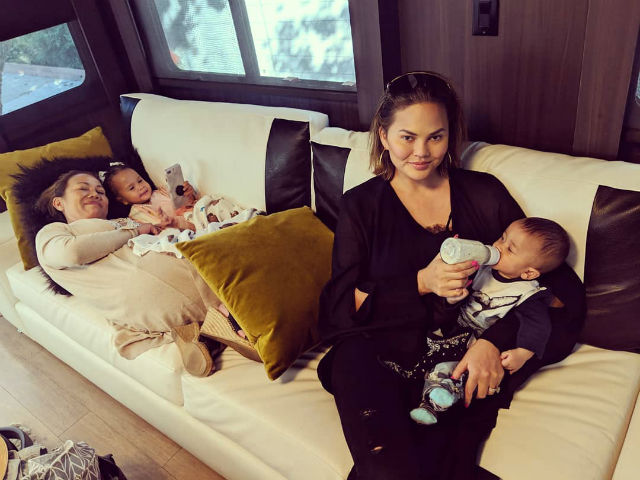 Will the mommy shaming never end? Chrissy Teigen has once again been criticized online for her parenting skills, and breastfeeding was the culprit in this latest online attack.

John Legend shared a picture of his wife feeding their son, Miles Stephens, by way of a bottle while waiting backstage on the set of NBC’s The Voice. Teigen was focused on nurturing her son. Some critics, however, could not get over the fact that the star mom was feeding little miles with a bottle instead of nursing him by traditional means. One of Jon Legend’s fans even went so far as to ask, “You no longer breastfeed?” Chrissy, of course, wittingly replied by saying, “John never breastfed Miles.”

We can always count on Chrissy Teigen to fire back at momshamers with hilarious responses online. It was just a few months ago that critics tried to slam the celebrity mom for riding down the playground slide with her daughter. The uproar was massive as many claimed to be concerned about little Luna’s well-being. Chrissy Teigen, however, took things into stride with a bit of sarcasm. “Weeeee are very skeptical of slides right now,” Teigen captioned underneath a picture of her and Luna making their way down the playground equipment.

Chrissy Teigen expressed her thoughts on mommy shamers during an interview last year. “It gets to me every time,” the celebrity mom shared. “I feel like pregnancy is the time for them to warm you up to the shaming that’s about to come because they really go in on you.”

Where there are critics, it seems that Chrissy Teigen will always be ready. Stay tuned for more celebrity mom news!