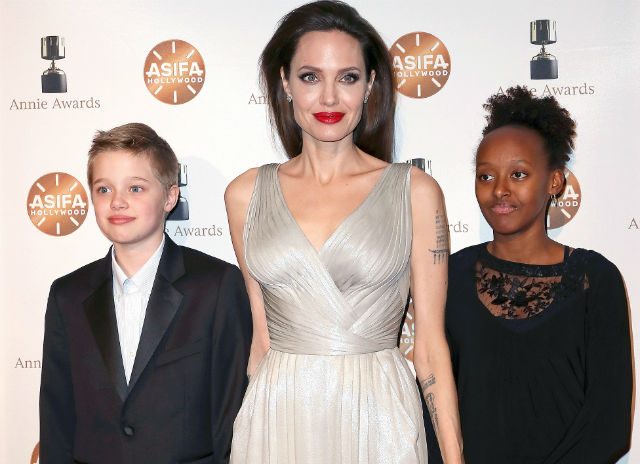 Brad Pitt failing to pay child support? Don’t believe the hype, says the actor’s camp. An inside source addressed allegations of Brad Pitt shrieking his financial responsibilities as a father on Tuesday after court documents revealed that Angelina Jolie was seeking to force her ex-husband to pay child support.

According to a brief drafted by Angelina’s lawyer, Samantha Bley DeJean, “[Pitt] has a duty to pay child support. As of present, [Pitt] has paid no meaningful child support since separation. Given the informal arrangements around the payment of the children’s expenses have not been regularly sustained by [Pitt] for over a year and a half, [Jolie] intends to file an RFO (Request for Court Order) for the establishment of a retroactive child support order.”

Every time #AngelinaJolie does something evil she goes on a press junket humanitarian mission in 3rd world country.
So expect to see her wearing a headscarf in a slum near you soon.#BRADPITT

Although the term “meaningful” remained undefined throughout the brief, the mere fact that Brad was the subject of child support proceedings was enough to make the headlines. Such publicity, according to an inside source in the actor’s camp, is partially what Angelina Jolie wanted.

#AngelinaJolie is doing her best to bar her children from seeing their father #BradPitt. Sad to see you support a woman who refuse to let her children spend time with their father. Did you grow up without a father? You such a typical short-sighted SJW @GugsM but not a good one.

“Brad fulfills his commitments,” a family friend told The Los Angeles Times. “This happened because Brad became fed up and said he wanted to start the formal process of divorce again and filed papers to do that,” the source added. “[This is] nothing more than a publicity stunt.”

"The aim of Angelina's routine court filing is to provide closure to the marriage in a way that clears a path toward the next stage of their lives and allows her and Brad to recommit as devoted co-parents to their children." -via spokesperson for #AngelinaJolie . #BradPitt pic.twitter.com/SjrNQzOqfv

Angelina Jolie and Brad Pitt were married for two years before separating in 2016. Jolie explained what she believed put a strain on their union, which was six years strong before their exchanged vows, during an interview with ET Online last year.

“We had met working together and we worked together well,” Angelina revealed. “I wanted us to do some serious work together after [Mr. and Mrs. Smith]. I thought it would be a good way for us to communicate. In some ways it was, and in some ways we learned some things. But there was a heaviness probably during that situation that carried on and it wasn’t because of the film.”

#BRADPITT has been through unimaginable Hell being married to the disturbed soulless #AngelinaJolie for over a decade.
She says he drinks? Yeah I'm sure he did. Had to. He stayed only for those kids and now she's using them as a weapon.#AngelinaHarpy