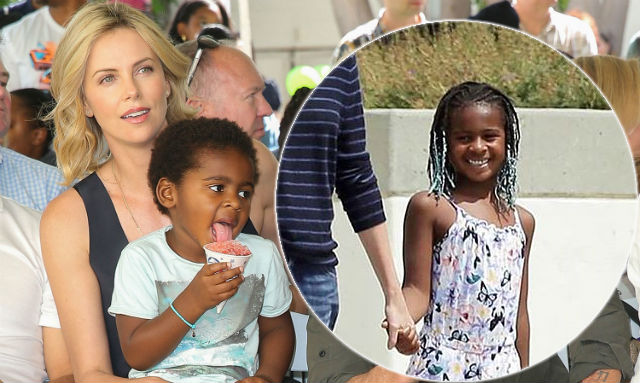 Charlize Theron is catching heat once again over the way her son Jackson dresses. This time, the celebrity mom `is getting the business over her son’s braided hair.

Now, make no mistake, men and boys have their hair braided all of the time. Males usually don’t have beads coupled with parting that indicates a style that little girls usually rock to school, though. Jackson’s hair, coupled with his onesie that also appears to be designed with little girls in mind, had some on social media mistaking him for a girl.

According to one media outlet, “Jackson is often confused for a girl because he prefers dressing like one.” What do you think?

Twitter certainly wasn’t feeling Jackson’s latest hairstyle and overall look, which is why they took time to drag Charlize Theron for it. “This is actress Charlize Theron and her adopted SON,” one Twitter user wrote. “The world is keeping quiet while sick people like Charlize Theron are grooming innocent kids into pets. This is wrong.”

Another tweet read, “When Y’all gon cut up and argue about Charlize Theron’s little black adopted son that’s always spotted in girl clothes? I been waiting. I want to see the hoteps tweet their bootleg conspiracy theories too.”

This definitely isn’t the first time that Jackson has been spotted dressed in clothes fit for girls. It was just a few months ago that the 6-year-old rocked an Elsa costume with wig and all to the disproval of social media.

Still, despite the criticism, Charlize Theron does not back down from the realness that is motherhood. The celebrity mom shared her experience as a single parent with The New York Times a few weeks ago.

“I just remember my body and my brain not really being on the same page,” she said of the beginning stages of motherhood after adopting her son. “That period, especially the first couple of months, is so all-consuming that you have these small moments where you realize how far you have pushed yourself aside just to make sure this little thing stays alive,” Theron said.

How will Charlize Theron dress her son next? We’ll just have to wait and see!