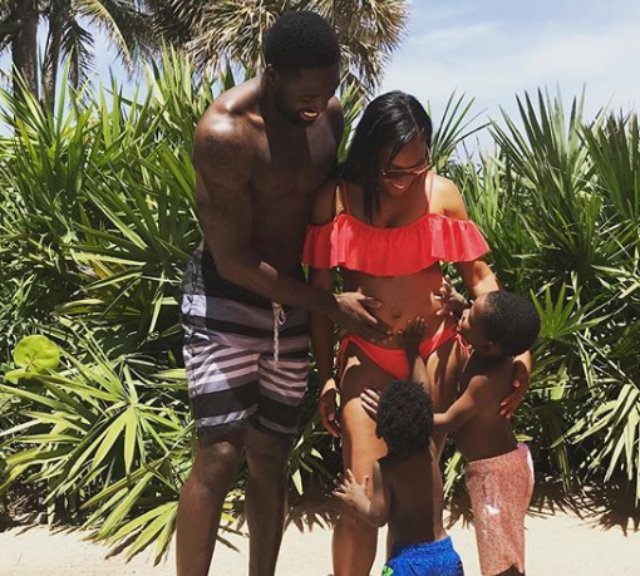 Congratulations to Chanel and Torrey Smith who are expecting their third child. The NFL family announced their family’s expansion via social media a few days ago.

“Having a great time on the beach with these 4,” Torrey told his Instagram followers on Monday. “Baby Smith is coming,” the Carolina Panthers exclaimed. “Is it a boy or girl,” he asked.

Yep…this happened. Cute gender announcement coming next week. I couldn’t hold it anymore. Don’t even guess how far along I am…they say baby #3 just pops out on u ???

Chanel also took to her Instagram page to share the joy of her pregnancy. “Yep…this happened,” the celebrity mom said. “Cute gender announcement coming next week,” Chanel promised. Still, “I couldn’t hold it anymore. Don’t even guess how far along I am…they say baby #3 just pops out on you.”

Thousands of fans gave congratulatory remarks to Torrey and Chanel Smith on their expectancy. “I knew she would make us an aunt one more time,” one follower said. “What if it’s twin girls?” Wouldn’t that be great?

TJ had a graduation today at his school. I almost cried smh. I love my boys!

The Smiths are newcomers to North Carolina since Torrey was picked to play for the Panthers a few weeks back. “I was happy when they told me who the team was because if I had to go anywhere, I wanted to go to a winner, a place that has a chance,” Torrey recently said of him leaving the Eagles for the Panthers.

The star athlete also talked about playing with Cam Newton. “We actually used to work out in the offseason up in Baltimore, so I’ve been familiar with seeing the Panthers camp come through, all the guys getting together to work up there,” Torrey said. “So it’s pretty cool to now be a part of that officially instead of just joining in because don’t have a quarterback to throw to me, so I’m excited about that.”

KENZO HART GOES FOR A SWIM

KENZO HART GOES FOR A SWIM