"Did You Know That A Tyrannosaurus Rex Is A Carnivore?" 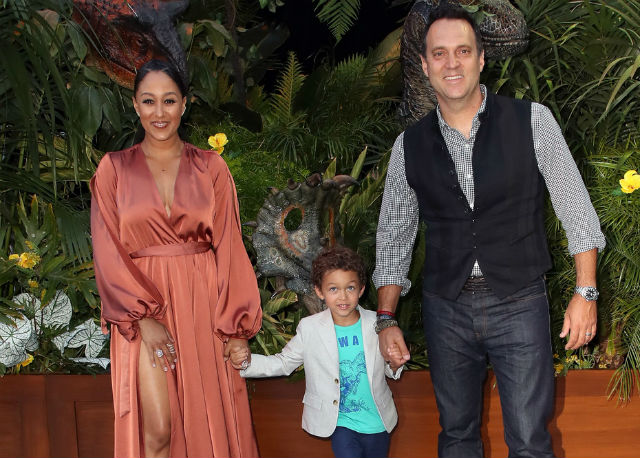 Tamera Mowry-Housley and her family were one of many celebrities in attendance at the Jurassic World: Fallen Kingdom at Walt Disney Concert Hall earlier this week. Tamera and her husband, Adam Housley, brought their son, Aden Housley, to the screening.

Jurassic World: Fallen Kingdom has everyone excited about including young Aden. It was just a few days ago that Tamera shared a picture of her son having fun while playing with his toy T-Rex. “Mom. Mom. Did you know that a Tyrannosaurus Rex is a carnivore,” Tamera captioned in reference to what her son said as she took the pic. “That means he eats meat. Roar!” So cute!

Mom. Mom. Did you know that a Tyrannosaurus Rex is a carnivore? That means he eats meat. Roar!!!

Tamera is the proud mom of two kids, Aden and Ariah Housley. The celebrity mom enjoys her life as a parent but definitely admits that there have been a few hiccups on the journey. “There was one time I was holding my son … I had just nursed him and he spit up,” Tamera recently told media. “It went right in my mouth,” she revealed.

Last night at the @jurassicworld premiere! I was obsessed with Jurassic Park, and this movie did not disappoint!! @prattprattpratt + @brycedhoward had impeccable chemistry! Dress by @michaelcostello, I felt like a Grecian goddess! Hair by @raibmason + Makeup by @makeupbymotoko + Styling by @miskellyjohnson #jurassicworld

Mowry also shared what she typically buys her expectant friends. “People always forget about the diaper pail,” the actress said at the Jurassic World: Fallen Kingdom premiere earlier this week. “Just get a simple one,” she advised. “They will love it. I love mine.”

DRAYMOND GREEN, STEPHEN CURRY AND THEIR KIDS HAVE FUN AT THE WARRIORS PARADE