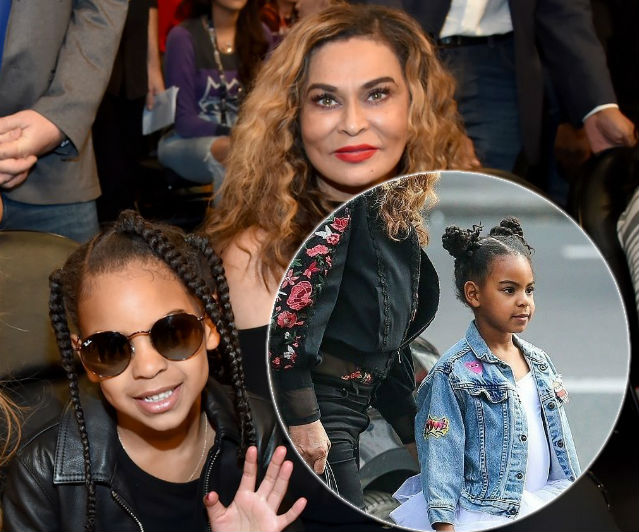 One of Tina Lawson’s followers noted that Blue corrects everyone after viewing a clip of Beyonce and Jay-Z’s daughter telling her grandmother that filming inside of one of Paris’ most beautiful theaters was prohibited. That fan didn’t know how right they were in the observation. Tina Lawson recently revealed to Us Weekly that Blue Ivy Carter indeed pinpoints everything that she sees wrong in a room.

“[It’s] absolutely [Blue’s thing] to correct at all costs,” the celebrity grandmother said. Tina also acknowledged that Blue was totally shining the light on her misstep at the theater. “[She was] busting me,” Lawson said. “She’s calling me out.”

Our sister is still in Paris, France with grandma #Tinalawson. We spoke to them today and discussed how we were going to fire the umbrella man. Stay tuned for more details.

Those who follow Tina on Instagram may have viewed the video clip of the businesswoman attempting to show fans the striking design of a theater in Paris a few weeks ago. Tina and Blue were at the facility to take in the ballet and the star grandmother was hoping to get in a bit of footage before the show. While Tina was providing commentary to her followers, Blue chimed in with a bit of reprimand. “You’re not supposed to take videos, grandma,” the little one said. “You’re not supposed to.” Hilarious!

When you are trying to sneak a video ?

Enjoying the ballet wasn’t the only fun that Tina and Blue had in Paris. “We did something every day,” Lawson told Us. “We went to Disneyland in Paris, we went shopping every day at Galeries Lafayette. She loves that store.”

'BUMBLEBEE' COMES TO THEATERS THIS CHRISTMAS