Actually, It Was Luna Street For A Day 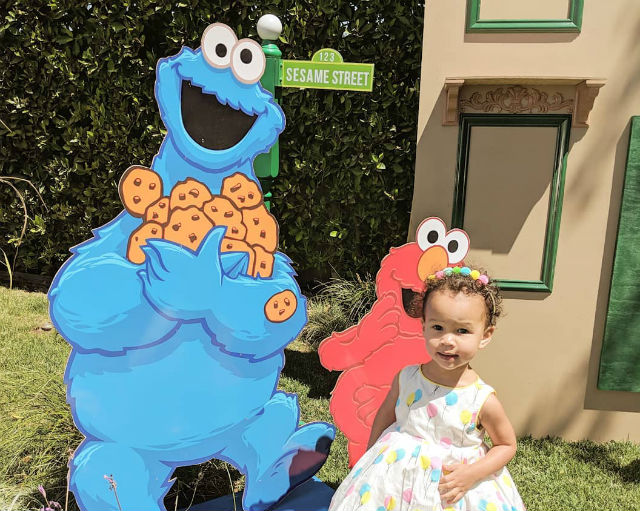 Happy Birthday, Luna Stephens! The daughter of John Legend and Chrissy Teigen celebrated her second birthday this past weekend with a Sesame Street themed party.

Luna was all smiles while surrounded by several characters from the hit children’s series. The imagery of Cookie Monster and Elmo especially caught the little one’s attention as Luna posed for a picture next to cardboard boxing that spoke of the party’s theme. Everyone knew that 123 Sesame Street was the place to be as John and Chrissy had a cake and decorations that heavily relied on the hit series. The celebrity parents even ordered pastries that changed the name of the celebrated road to “Luna Street.” The alteration seemed befitting since this past weekend was all about the tot.

Perhaps the only thing as exciting as the birthday bash John and Chrissy gave their daughter was the afterparty. Luna did not let the festivities die out, but rather put on her high heels and got ready for another round of pictures and filming. The little one was captured saying, “Cheese” in one clip. Luna also tried to give fans a bit of the peace sign but hadn’t quite mastered the art of only holding up two fingers instead of her whole hand. “I thought she was drying her nails,” one of Chrissy’s fans mused after reading the celebrity mom’s caption, which told fans that she and Luna were “working on our peace sign.”

Still, the weekend was nothing short of a success for the Stephens. “Thank you @pamperspure for helping celebrate our big girl’s 2nd birthday,” Chrissy wrote online after her daughter’s birthday festivities this past weekend. “Luna’s rocking her llama diaper under this birthday suit! Aaaaaannnnd Pampers made a donation to the Southeast Llama Rescue in honor of this day. Thanks for making her day so special.” The celebrity mom also thanked Duff’s Cake Mix for the amazing cake that stood out.

!!! Thank you @duffscakemix and @tianasakona for helping us make this amazing cake for Luna! Ok so you did most the work but those eyes and half of cookie’s fur is all john and I!

Luna Stephens is Chrissy Teigen and John Legend’s oldest child. The 2-year-old will become a big sister in coming months when John and Chrissy welcome their son.

SEE THE PHOTOS! PREGNANT CARDI B. PERFORMS AT COACHELLA 2018

SEE THE PHOTOS! PREGNANT CARDI B. PERFORMS AT COACHELLA 2018