KEVIN HART AND WIFE SHARE CUTE CANDIDS OF THEIR SON

"Today Was A Good Day" 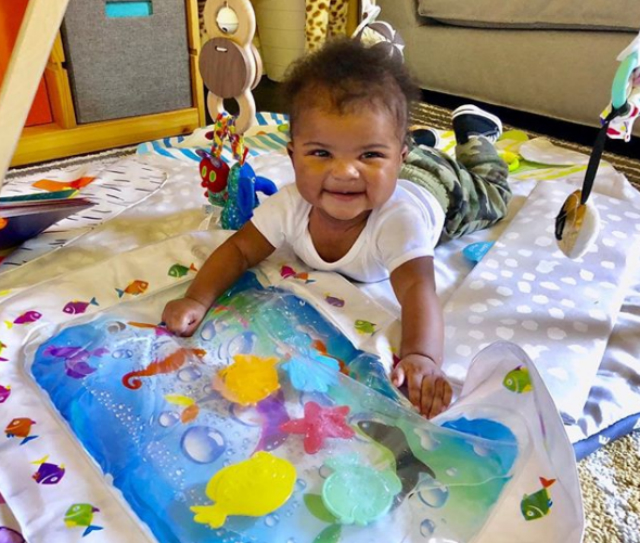 Can we take a moment to dote on Kenzo Hart? Kevin and Eniko Hart recently shared pictures along with a video clip of their infant son, and we could not get enough of his cuteness.

hey?? SONshine ?☀️ kev said “ is he ready to play chess or ride some horses?” Lmao!

One video clip showed Kenzo reaching for dad. Eniko appeared disgruntled by her son’s preferences as she wanted to hold the little one at that moment. “Baby Zo Loves his Daddy,” Kevin told his Instagram fans. “This video captured him reaching out for me for the first time,” the celebrity father went on. “I swear I live for moments like this,” Kevin doted. “I’ve been teasing Niko nonstop.”

Baby Zo Loves his Daddy ???? This video captured him reaching out for me for the first time. I swear I live for moments like this….I’ve been teasing Niko nonstop ???? #Harts #Family #LiveLoveLaugh #HappySundayPeople

Other pictures of Baby Zo showed him hanging out with his older brother and sister. One candid showed Hendrix holding his younger brother while watching television. “Just Chillin,'” Eniko told her social media fans. “They so handsome,” one fan said. Another subscriber wrote, “Now that’s who that baby looks like.” We think Kenzo favors his dad a bit more than his older brother. What do you think?

Kevin and Eniko Hart welcomed their son last November. The little one came in the middle of the holiday season, which turned out to be an even greater blessing for the family. “Feeling beyond blessed,” Kevin shared along with a picture of his then-newborn son last November. “Morning vibes with my little man,” the star father added.

Kenzo is Kevin and Eniko Hart’s first child together. Heaven and Hendrix are Kevin’s kids from his first marriage.

RUSSELL WESTBROOK AND THE FAMILY HOST "WHY NOT?" BOWLING EVENT

RUSSELL WESTBROOK AND THE FAMILY HOST "WHY NOT?" BOWLING EVENT