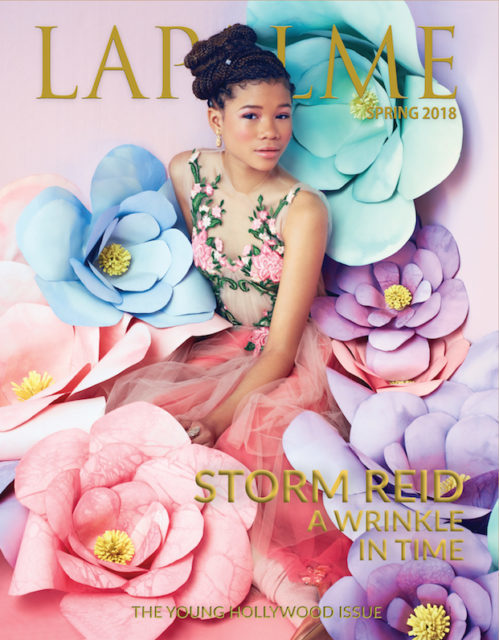 Storm Reid is one of the most recognized stars of the moment. With her blockbuster movie, A Wrinkle in Time, out in theaters now, Reid has become one of the most sought-after interviews for not only television outlets but for magazines as well.

Recently, the young star sat down with LaPalme Magazine to talk about her new movie and more. Check out an excerpt of what she had to say to the publication below.

Reid on staying grounded as a young star in Hollywood: “I think kid actors may grow up faster, with the responsibility of having to do school work, learn all lines. But in a life sense, it’s about the people you surround yourself with – what you’re doing outside of acting. If you’re all about the nice things and fame, you can grow up faster. But if you’re doing what you love, and being a regular kid off the set – you can be okay. I’m still hanging out with friends, watching cooking shows. It has to be a good balance – acting and being a regular teenager and human being. It’s not about getting so much attention ALL the time. We’re still kids and we won’t be perfect all the time.”

?? This day couldn’t get any more magical. Thank you @lapalmemagazine for this amazing cover shoot and letting me embrace my inner flower child. ?? Hair: @shawnna818 Makeup: @mylahmorales ? (SWIPE)

Reid on the message of A Wrinkle in Time: “I know I got to be part of something huge. I just love sharing the film’s message. I think people will be touched and hopefully come together as one. That’s what we really need to be thinking about now, in a pretty dark time – coming together as one.”

Reid on her favorite genre as an actress: “I actually prefer the dark heavy stuff. Of course, I loved doing Nickelodeon – a fun experience and you make a lot of friends. But I really love the heavy dramatic stuff – tell somebody’s story in depth. Drama is my favorite genre.”

To read the interview in its entirety, click here. If you haven’t seen the movie yet, what are you waiting for?! You definitely will not be disappointed.

'JIIN' IS A BUDDING FILM WITH ALL THE MAKINGS OF GREATNESS