The Film Has Made Over $387 Million Worldwide 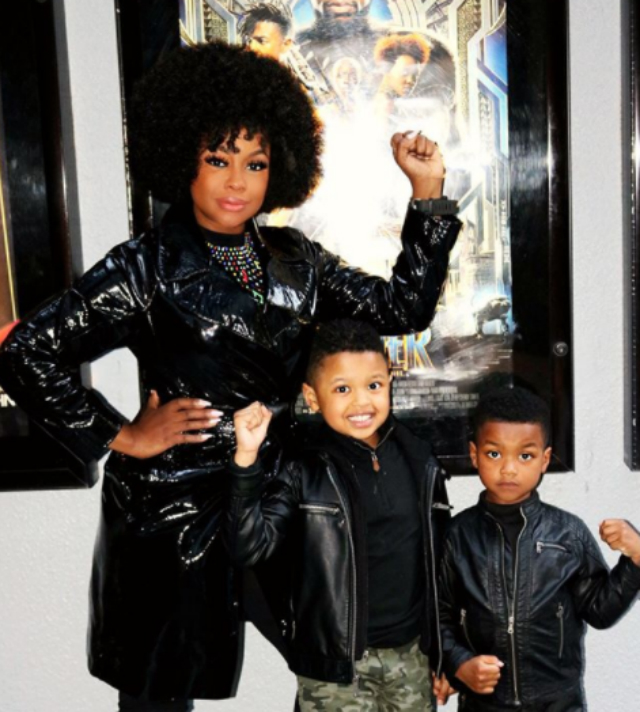 Phaedra Parks and her sons, Dylan and Ayden, were dressed and more than ready to support Black Panther this week. The celebrity mom and her kids rocked wear that paid homage to the Black Panther Party all while showing support for the film.

#mood when you have to go to work the day after you saw #blackpanther the real #President in #allblack ✊?

Phaedra showed major love to the movie’s director, Ryan Coogler, who also did a bit of screenwriting for Fruitvale Station and Creed. As the caption of one of Phaedra’s pictures reads, “Coogler’s budget for #blackpanther was $200 million (the most ever given to an African American director). During the movies premiere weekend, it made over $387 million worldwide!” Pretty impressive!

#BlackPanther director #RyanCoogler is a #screenwriter of many renowned movies including #FruitvaleStation and #Creed. This #Oakland native is a former #football player for Saint Mary’s College of #California. It was at Saint Mary's where Ryan discovered a potential #future in #film. He was in a mandatory creative writing class when his professor assigned a project that entailed writing about a personal experience. Following in his father's footsteps Coogler worked as a counselor with incarcerated youth at #SanFrancisco's Juvenile Hall. He has numerous accolades for his work in film. In 2013, Time named him to their list of the 30 people under 30 who are changing the world. Coogler's budget for #blackpanther was $200 million (the most ever given to an African American director). During the movies premiere weekend it made over $387 million worldwide! #wakanda #wakandaforever #bhm #blackhistorymonth

Parks has also been doing big things since her stint on Real Housewives of Atlanta came to an end. Fans saw pictures of the fit and fabulous Phaedra just weeks before the former housewife announced her signing with Wilhelmina Models.

“A supermodel started this company and she wanted to give power back to the women and I think I stand for the same things. I have the opportunity to show people that beauty can come in every size, shade, color, and age. It’s exciting and an adventure!”

Phaedra Parks is the proud mother of two sons. Both Dylan and Ayden celebrate their birthdays in May.