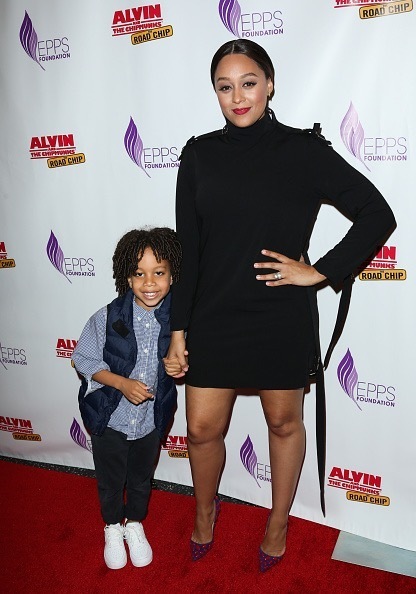 If you have multiple children, then you know that every pregnancy is different from the other. Some have an easier time the second-time around while others say that the first-time was a cakewalk.

#nyc you always make me feel like #royalty ?! I asked and you showed up! Thanks for always making feel loved. Dress- #alexandermcqueen Shoes- #tabithasimmons Hair- @nikkinelms ??- @judystylexo Makeup- @nickyposley

Well, for mom-to-be, Tia Mowry, her second pregnancy is unquestionably different from the first.
“This time around, I’m older, which I was a little worried about, but I have more energy,” the actress told Us Magazine. “With my first pregnancy, I was kind of afraid to exercise. It was my first. This time around, I’m exercising. It just seems to be going rather well.”

If you didn’t know, the 39-year-old mother of Cree and wife to Cory Hardrict is having a baby girl this time around. The Game alum told US that she is enjoying this pregnancy a lot more due to the fact that she is not dealing with morning sickness. “I had nausea with my son throughout my whole entire pregnancy and it was terrible. This time around, I only had it in the first trimester and I didn’t think it was going to go away. When it went away, I was like, ‘Hallelujah. This is what it feels like?’”

We about to head out to brunch real quick. ? Tap for outfit details ?? Floor duster- #theperfext

So, is little six-year-old Cree excited about being a big brother? Well, the actress tells states that, he is “so happy” but he’s asking his parents for a baby brother instead.

Are you the parent of multiples? Which pregnancy was the easiest for you? Share you stories, we’d love to hear!

IS MONICA PREGNANT WITH HER FOURTH CHILD?

CYN SANTANA AND JOE BUDDEN SHARE PHOTOS OF THEIR SON

CYN SANTANA AND JOE BUDDEN SHARE PHOTOS OF THEIR SON