MONICA, TINY, AND THE GIRLS TAKE XSCAPE TOUR TO DETROIT 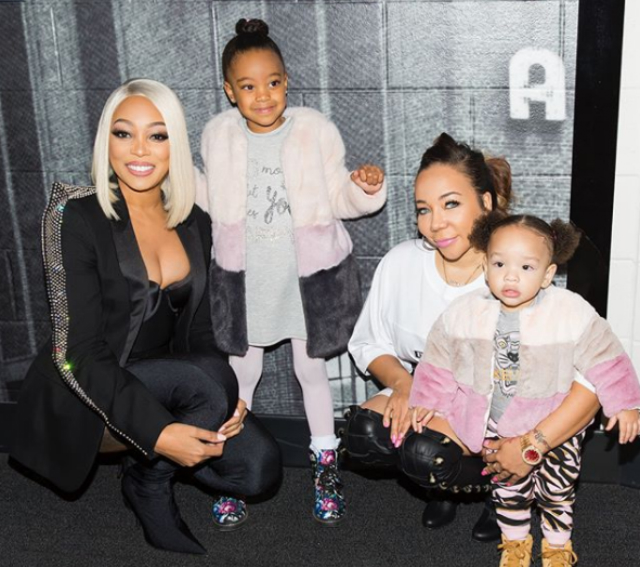 The week wouldn’t be complete without us sharing pictures from Monica, Tiny, and their daughters time on the road. The girls and women touched down in Detroit, Michigan, on Thursday and met a crowd of fans who were ready to party with Xcape and Monica.

Monica gave a stellar performance that went well with Xscape’s hyped show. Tiny joined her other group members in giving the crowd blasts from the past with some of Xscape’s greatest hits. “Just Kickin’ It” was one of many beloved tunes that the group performed onstage.

While the masses grooved to the music, Laiyah Brown was steady busy trying to get Tiny’s attention onstage. “Saying we love these two is an understatement,” Monica said of her daughter and Tiny’s little one, Heiress Harris. “Every night Laiyah takes her time and finds @majorgirl & @heiressdharris,” the celebrity mom continued. “She likes to try and get Aunties Tiny’s attention when she’s on stage.”

Monica shared several photos from the spectacular evening, which included a candid of Laiyah and Heiress just kicking it backstage. “These two light up our lives with an unexplainable amount of joy,” Monica captioned underneath a picture of Laiyah and Heiress smiling. “It’s so amazing to experience the strength and protective nature of our boys and then have the youngest two bring the softer side,” she added. “God knows what he’s doing and what you need!”

These two light up our lives with an unexplainable amount of joy!! It’s so amazing to experience the strength and protective nature of our boys & then have the youngest two bring the softer side !! God knows what he’s doing and what you need !! @majorgirl & I got the perfect combination in our [email protected] & @__shannon__brown__ you got hands full… LOL

GRAB IT! HERE'S HOW YOU CAN GET YOUR HANDS ON LUNA'S FOOD TRUCK

GRAB IT! HERE'S HOW YOU CAN GET YOUR HANDS ON LUNA'S FOOD TRUCK