Home » NEWS » DADDY AND ME: GRANT HILL AND DAUGHTER ENJOY A B-BALL GAME

DADDY AND ME: GRANT HILL AND DAUGHTER ENJOY A B-BALL GAME 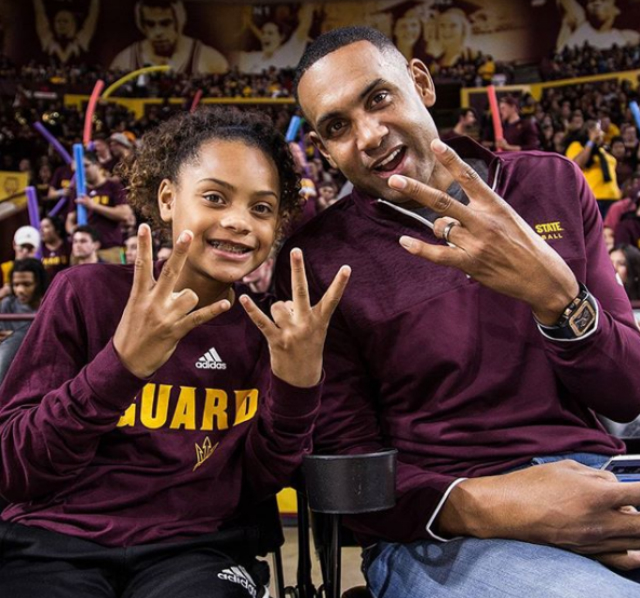 Grant Hill is enjoying quality time spent with his family. The celebrity father recently shared pictures of him hanging with his daughter, Lael, at a basketball game.

“With Lael to see my friend and teammate #BobbyHurley and his #3 ranked @sundevilhoops tonight in Tempe,” Grant shared earlier this week. “The Brotherhood,” Hill added. “Loving the love given to teammate Bobby Hurley from Grant Hill,” one fan wrote in response to a photo of Grant and Lael shared on the Sun Devil Men’s Basketball Team’s Instagram page. “Much Respect,” the follower exclaimed.

It was just a few weeks ago that Grant Hill discussed his life as a professional basketball player living through a life-changing injury with GQ magazine. “Going through a season, it’s about managing pain, discomfort, and soreness,” he explained. “‘Are you hurt or are you injured?’ Sometimes you can play through things and sometimes you can’t! It’s not an exact science. But the only time you’re truly pain-free is the first day of training camp. After that, it’s a continuous state of fatigue and a continuous state of soreness.”

Grant went on to tell the media source, “I just think my situation was mismanaged. The ball was dropped—no pun intended—early on, which caused a whole new set of problems that lasted for another three years.”

Grant Hill began his career in 1994 playing for the Detroit Pistons. He and wife Tamia Hill parent two daughters.