WORKING MOMS: MONICA BROWN AND TAMEKA HARRIS HAVE THEIR KIDS’ SUPPORT ON THE GREAT XSCAPE TOUR 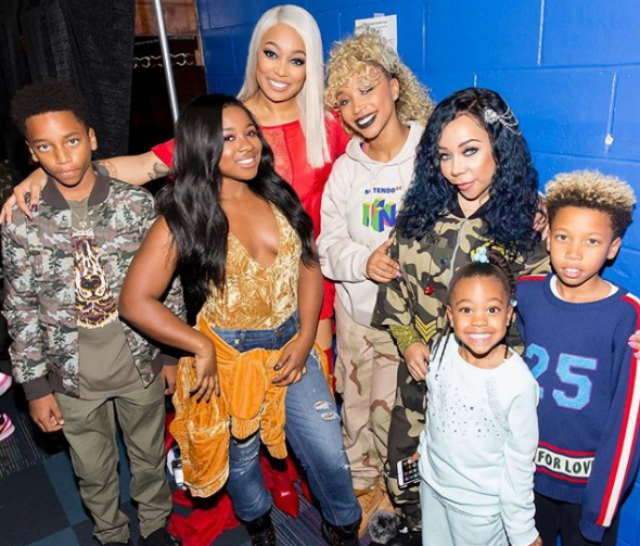 The Xscape Tour is taking cities by storm, and who best than the kids to serve as the backbone of the event? Monica Brown and Tameka “Tiny” Harris had the full support of their kids at the group’s most recent showing in Columbus, Georgia.

I got Moms whole show on video ! She couldn’t believe it ?

“Tonight’s Show in COLUMBUS GEORGIA was Epic,” Monica wrote online after the performance. “It’s always an incredibly heartwarming feeling when our babies are watching and one is even performing.” Monica served as a guest appearance on the tour and was sure to take a group pic with her kids as well as group member Tiny Harris and her oldest daughter, Zonnique Pullins.

Heiress, Tiny’s youngest, was unable to accompany her mom on this installment of the tour. “Miss my Sunshine @heiressdharris,” Tameka shared with her Instagram followers. “Only been two days but it’s so hard to be away,” the celebrity mom revealed.

Miss my Sunshine @heiressdharris only been two days but it’s so hard to be away! Thx @monicabrown for this picture of my two babies @laiyahbrown next stop pick up Heiress time!! Wish my boys loved to travel but they could care less lol ????

It’s been several months since Xscape launched their multiple-city tour. Fans of the group got an up-close-and-personal look at everything that went into their initial reunion performance at the ESSENCE Festival in the Xscape: Still Kickin’ It reality series. The drama unfolded, old wounds were reopened, and squabbles were ultimately settled in the four-part series featuring all four of the group members.

Many fans thought the reuniting was permanent and were sorely disappointed to learn of Kandi’s plans to return to her life as a successful businesswoman sans the group when the tour ends. Still, diehard Xscape supporters can enjoy the reunion while it lasts. The next stop on the Great Xscape Tour comes tonight at the Verizon Theatre at Grand Prairie in Grand Prairie Texas.

KIYAN ANTHONY IS A BURBERRY BOY