CHRISSY TEIGEN BUMPS IT UP IN NEW PHOTO SHOOT 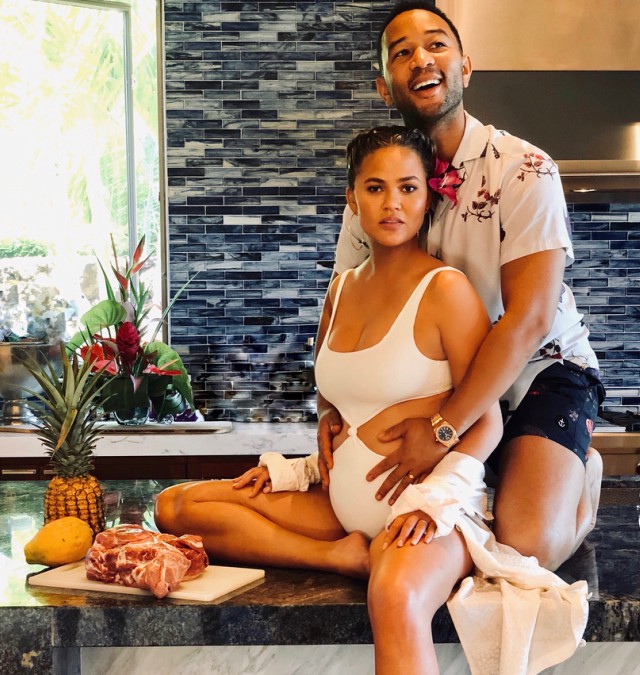 Chrissy Teigen is enjoying expectancy and the island life. The celebrity mom shared pictures of herself glowing while rocking formal and not-too-formal maternal wear.

One photo showed Chrissy cradling her stomach while showing off a full-length gown that hugged her stomach just enough to show off her bump. “Aloha, bebe,” Chrissy captioned. “Amazing,” one fan wrote. A few fans thought the picture was from Chrissy’s pregnancy with Luna. We’re guessing they missed the big announcement.

Another candid of Teigen showing off her bump was undeniably from this year. The model sat on top of the kitchen counter and struck a striking pose while cradling her protruding stomach. “Spot the difference,” Chrissy joked.

Teigen announced her and husband John Legend’s expectancy of their second child a few weeks ago. Luna, the couple’s daughter, actually shared the news of her mom’s pregnancy by rubbing on Chrissy’s stomach and telling her grandmother that a “baby” was inside. “It’s John’s,” Chrissy captioned.

It’s hard to believe that, with the impending arrival of their second child, John and Chrissy were at one time on the verge of breaking up. John shared his wife’s reaction to his attempt to end their relationship during a recent interview with The Guardian.

“I was really stressed and busy,” he said. “I was just like, ‘I’d just be happier single right now,’ and she was like, ‘No.'” Chrissy’s simple response was all that John needed to keep trying. Now, the celebrity couple is expanding their family with another little one who promises to be just as funny as his or her mom and dad.

Chrissy Teigen and John Legend are expecting their little prince or princess to arrive in coming months. Stay tuned for updates!