Home » Viral Kids » 10-YEAR-OLD HAITIAN IMMIGRANT TO TRUMP: ‘WE ARE NOT CRIMINALS’

10-YEAR-OLD HAITIAN IMMIGRANT TO TRUMP: ‘WE ARE NOT CRIMINALS’ 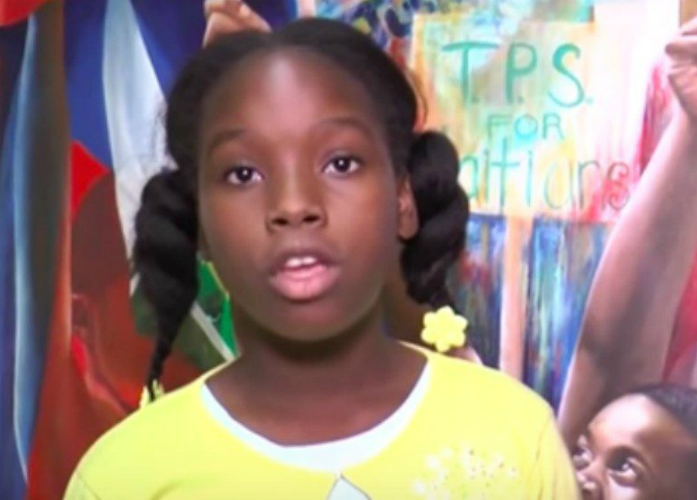 Ronyde Christina Ponthieux is a hero by a few people’s standards. The 10-year-old took to social media to leave President Trump a bold message after the commander-in-chief decided to end the temporary protected status of nearly 60,000 Haitian immigrants. The president deemed the act as necessary to better protect American citizens from terrorism. Ronyde, who is Haitian, had a direct response.

“We are not criminals,” she said in her video to Trump. “Like my parents, like your parents, like you, they are hard-working honest people who just want a safe place to raise their families,” Ronyde explained. The 10-year-old went on to tell the president that her parents, “have deep roots in their communities; they pay taxes; they contribute to the social, economic and political fabric of this great nation.”

Temporary protected status was granted to Haitian immigrants who were affected by the 2010 earthquake in their native land. Hundreds died as a result of the natural disaster and thousands were displaced. Former President Obama implemented protection to help those who were destitute get back on their feet, which is something that Ronyde and her family have been able to do as a result.

The Ponthieux family settled in Florida where Ronyde’s father became a nurse. Now, the immigrant dad stands to be deported when his temporary protected status ends several months from now.

Many have protested the president’s decision to end the temporary protected status of Haitians because they view the move as nothing short of discriminatory. Wouldn’t it be great if Ronyde’s plea got to the right person and her father were able to stay instead of being uprooted after proving himself to be a contributing individual in America? Anyway, check out the 10-year-old’s video below!

REPORT: AMAR'E STOUDEMIRE IS THE FATHER OF A CHILD FROM FLORIDA