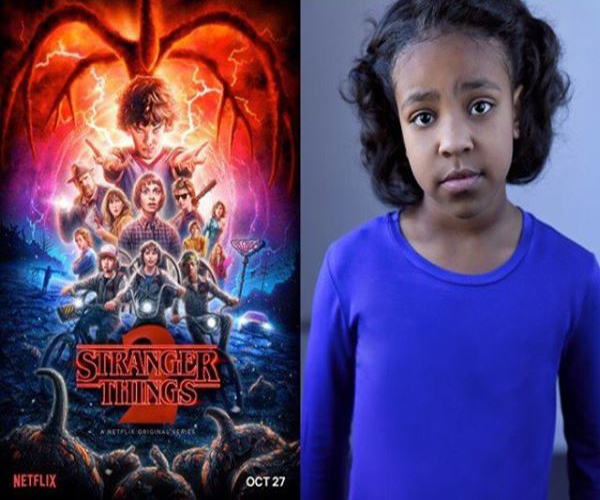 Stranger Things has unquestionably become a cult phenomenon; therefore, it is no surprise that Stranger Things 2 has become bigger and better than season one!

In addition to the characters that we have come to know and love, there is a new face in Hawkins and it is Priah Ferguson who portrays Lucas’s little sister, Erica Sinclair, who has officially won audiences over even though she first appeared in episode two.

Priah Ferguson was born in Atlanta, Georgia and is the eldest of two girls. Introduced to the performing arts at the age of 5, she immediately took to theater where she was able to perfect her God-given gifts of natural timing and profound delivery in both comedic and theatrical roles.

In addition to her list of award-winning short film and commercial credits, Ferguson has several small-screen credits to her name that include the FX series, Atlanta, VH1’s Daytime Divas, PBS’s Mercy Street, among others.

Teen Vogue caught up with Ferguson to ask chat with her about her role and here are some of the things that she said.

“I know the Duffer brothers [the show’s creators] and the whole crew does amazing on their writing, so I was expecting that a little bit. ‘Oh, she’s an icon. She’s one of the best characters.’ I was not expecting all of that, but it’s amazing.”

“I liked how Erica just doesn’t care. She has an ‘it is what it is’ attitude, and ‘calling it a day’ attitude. I’m more like my character […] but not in a disrespectful way. I’m more like, ‘Girl, really? I didn’t know that!’ [to my friends]. I feel like my sister is more like… You know how little sisters or little siblings annoy you. So I take that from her and I take from what I have.”

Ferguson on returning to Hawkins for Stranger Things 3

“It was an amazing opportunity working with them, and, if they do want to expand my character and bring me back for season 3, that would be amazing and a blessing. But it was so awesome for them to say that. It was like, wow, oh my gosh. It was unbelievable.”

To read Ferguson’s interview with Teen Vogue in its entirety, click here. We cannot wait to see what the future holds for this rising star. We definitely hope it is more time spent in Hawkins, Indiana.