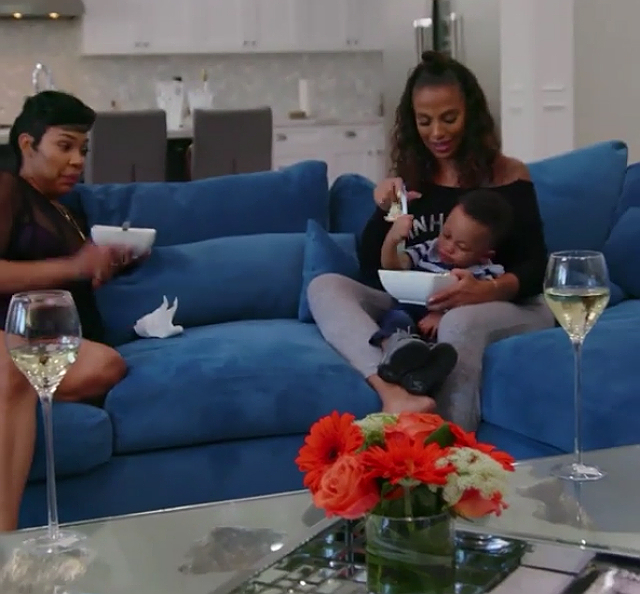 Crystal Smith had a guest with her on the third episode of The Platinum Life. The celebrity mom had her son on the set of the show and, of course, little Shaffer was the epitome of cuteness.

“Catch SJ on #ThePlatinumLife tonight!!! Less than 2hrs away,” Crystal told her Instagram fans before the episode’s airing. “I just watched,” one fan said. “He is the cutest thing!” Another subscriber said, “Despite all the negativity that may come your way I pray that you can ignore it or at least don’t take it to heart. I hope you get to enjoy your pregnancy.”

Crystal and her husband, Ne-Yo, shared news of their expecting a second child last week. Many were excited to hear of the couple’s family expansion. Others took the opportunity to spread nothing but contempt for Crystal and her spouse. Most of the criticism came from Ne-Yo’s ex-girlfriend, Monyetta Shaw, choosing to have her tubes tied after giving birth to their second child, Mason. Those who are Team Monyetta are absolutely convinced that Ne-Yo tampered with his ex-girlfriend’s reproductive health only to find someone else and start a new family.

“Don’t get why u made ur other baby mama burn her tubes just to move on n keep having kids,” one critic told Ne-Yo. “That’s just plain ole mean smh nice music but an a*shole in real life.” Others scrutinized Crystal directly.

Still, regardless of anyone’s opinion, Ne-Yo and Crystal Smith are having their second child in coming months. Stay tuned for more celebrity baby news!

LOLA MONROE JUGGLES PARENTING AND CAREER IN 'THE PLATINUM LIFE'