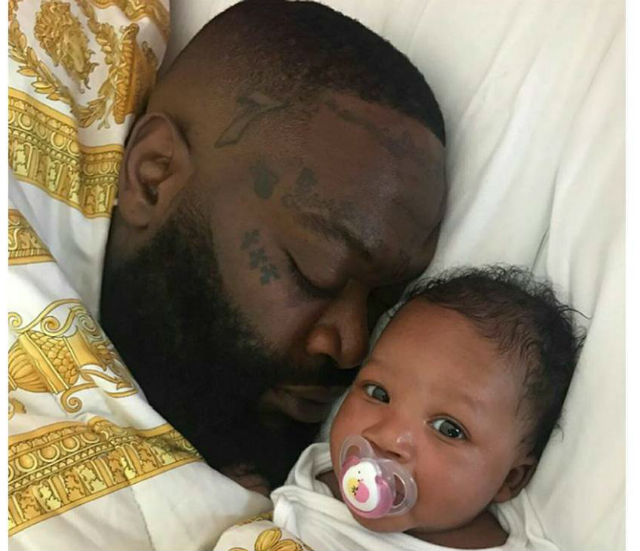 Rick Ross is definitely the doting father. The rapper welcomed his youngest daughter a few weeks ago, and the latest series of pictures, shared by the little one’s mom Briana Camille, shows that the rapper is enamored with his baby girl.

One of the photos shows Ross looking at his daughter with full adoration. “I need this one to be enlarged and put on a wall,” one fan exclaimed. “It’s beautiful.” Another follower wrote, “She got him wrapped around her little fingers already.” She most definitely does!

Briana and Rick’s daughter made her Instagram debut in a big way a few weeks ago. The newborn’s father shared a photo of her surrounded by wads of cash with his social media followers. Many agreed that the rapper was getting his daughter off to a great start in following in dad’s baller footsteps.

Despite his immense fame, Rick Ross is not too much of a star to apologize. In fact, the rapper asked for forgiveness earlier this year after making insensitive comments about women working for his empire. “My entire empire’s backbone is led by two of the strongest people I know, and they happen to be women, my mother and sister,” Rick explained to his Facebook fans. “The operations wouldn’t run without them, and I have the highest regard and respect for women in this industry. I have a daughter myself, my most cherished gift in the world.”

Rick Ross is the proud father of three kids. His newborn is the first with Briana Camille.

REPORT: KIM KARDASHIAN AND KANYE WEST ARE EXPECTING BABY #3 TO ARRIVE IN TIME FOR CHRISTMAS

REPORT: KIM KARDASHIAN AND KANYE WEST ARE EXPECTING BABY #3 TO ARRIVE IN TIME FOR CHRISTMAS